RJ the Raccoon (Bruce Willis) ends up using a group of forest animals to help him gather the food for Vincent (Nick Nolte), even though the leader of this group, Verne (Garry Shandling) suspects plenty.  The group accepts RJ and Verne makes a statement that makes him look bad to them, but everyone eventually makes up in time for one big heist on the neighborhood.  During this heist, RJ angrily reveals that he is in fact gathering food for the bear, while trying to get a can of chips.  RJ is able to escape with the food in the wagon, while the other animals are captured by the Verminator (Thomas Haden Church).

RJ sees the animals being put in a vehicle as Vincent approaches, surprised at how RJ has managed to get all his food.  As the vehicle begins to turn on the road, RJ begins to realize he needs his new family more than a debt paid, and takes the food into the road to make the vehicle steer off course.  The Verminator loses consciousness and the animals somehow maintain control of the vehicle, all while Vincent gives angry pursuit.  They lead him away by using balloons to push him off the vehicle, which comes crashing back into the neighborhood.

The animals manage to run off as the homeowner president and the Verminator chase them into the hedge, but waiting on the other side is Vincent, who’s landed.  They hide in the hedge, and RJ gets an idea to trap them, giving Hammy (Steve Carell) some caffeine to give him super-speed.  Everything slows down around him as he flips a Verminator’s trap in the yard, grabs a cookie, and sets up RJ in Verne’s shell.  Verne reels him in out of harm’s way as everything picks back up again, as the president, the Verminator, and Vincent are zapped and captured in a cage.  The police arrive and arrest the president for using an illegal trap, while Verminator is greeted by a joyful dog and Vincent is taken away to a national park.

RJ apologizes for deceiving his friends and they accept him into their group, all while Hammy has revealed that he has found his nuts and filled the storage log with them aplenty.  The end credits roll, featuring little cells from the comic strip and more comedic dialogue. 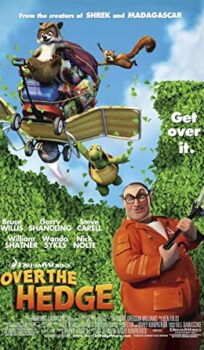