Fei Fei learns she can love others while cherishing the memory of her dead mother. She and Chin return to Earth and she accepts her new step-mom and step-brother into her life.

Fei Fei (voiced by Brycen Hall as a child, Cathy Ang as a teenager) is a young girl with a very happy family life. While celebrating the moon festival holiday, Fei Fei’s mother tells the legend of Chang’e (voiced by Phillipa Soo). The legend tells that Chang’e drank an immortality potion that also granted her godlike powers. But the love of her life, Houyi, was mortal and passed away. Chang’e now spends her life living on the moon and yearning for a time when she can be reunited with her love. Fei Fei believes the story is real, and her more grounded dad (voiced by John Cho) encourages Fei Fei and her mother’s flight of fancy. The family runs a successful business selling a baked treat called moon cakes. Unfortunately, Fei Fei’s mother dies young from a disease.

The film jumps ahead four years to when Fei Fei is a teenager. She is still in deep mourning over her mother, having cut her own hair off since she’s died. Fei Fei’s only friend is a pet rabbit named Bungee that her parents gifted to her. Her father starts dating another woman named Mrs. Zhong (voiced by Sandra Oh), who has an exuberant 8-year old son named Chin (voiced by Robert G. Chiu). Although the Zhongs try to bond with Fei Fei, she keeps them at a distance. During that year’s moon festival, Fei Fei is annoyed that her relatives and even her father mock Chang’e and say she isn’t real. Things get worse when her dad and Mrs. Zhong announce they are engaged. Fei Fei runs off, feeling that her father has forgotten her mother. She vows to build a rocket to the moon so that she can fly there, prove that Chang’e is real, and remind her father that his true love is her mother.

After various attempts, Fei Fei finally builds a rocket that she thinks can reach the moon. She and Bungee take off and enter the upper atmosphere. However, the rocket fails to continue ascending after she discovers that Chin and his pet frog Croak have stowed away onboard and her calculations didn’t account for their weight. They begin plummeting back to Earth when the ship is caught in a magical tractor beam. The beam pulls them to the moon where they crash land on the surface. Two magical lions then carry the kids and their pets to Chang’e’s moon palace. There, the heroes are greeted by various magical beings Chang’e created.

Chang’e meets Fei Fei and agrees to give her a photo proving her existence in exchange for a “gift’ she claims Fei Fei has for her (and that’s why Chang’e transported Fei Fei to the moon). Fei Fei abandons Chin at the palace to return to the crash site to find the gift (despite not knowing what the gift is). Meanwhile, Chin, who wants Fei Fei to be his sister, unsuccessfully attempts to get the photograph from Chang’e. Bungee gets imbued with magical powers and manages to activate a potion that Fei Fei believes can restore Houyi to life once it is combined with Fei Fei’s gift.

On her journey, Fei Fei befriends an exiled magical creature named Gobi (voiced by Ken Jeong). Gobi explains that he was exiled after he sang a song to Chang’e urging her to move on from her loss. Eventually, the pair realize that the gift is a piece of a medallion that Mrs. Zhong gave to Fei Fei. They return to the palace and a grateful Chang’e uses the medallion and potion to summon Houyi’s spirit. Houyi explains that once dead, he can never be brought back to life. Houyi disappears after urging Chang’e to move on. But Chang’e sinks into a depression and erects a forcefield around herself. Fei Fei’s grief allows her to enter the forcefield, but she too sinks into a depression over the loss of her mother.

Realizing Fei Fei is there with her, Chang’e approaches and gives her Houyi’s advice. Fei Fei realizes that she loves Chin and that her love for Chin does not cause her to forget her mother. Fei Fei then returns the favor. She shows Chang’e she is not all alone without Houyi, but surrounded by all the magical creatures she made and who love her. The forcefield dissolves and the women emerge. Fei Fei, Chin and Croak prepare to be transported back to Earth (Bungee decides to stay with a magical rabbit she met and fell in love with on the moon). As they return to Earth, the picture proving Chang’e’s existence burns, but Fei Fei is at peace and accepts the loss of the photo.

Jumping a year ahead to the next Moon Festival, we see that Fei Fei has embraced Mrs. Zhong (now married to Fei Fei’s dad) and Chin. She and her dad share a moment to remember Fei Fei’s mother. Fei Fei then plays with Chin under the light of the bright full moon.

There are also small voice roles for Margaret Cho and Kimiko Glenn. 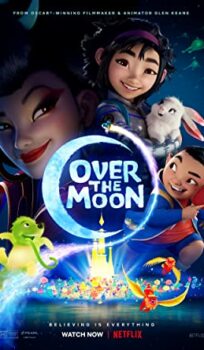