SHORT VERSION:
Lincoln defeats his rival “Bull” Hurley in the finals of the International Arm Wrestling Championships to become the new world champion, winning himself a new semi-truck and a $100,000 cash prize, in addition to an extra sum of money that he won from placing a $7,000 bet on himself before the tournament. More importantly, he wins the love of his son Mike and the respect of his former father-in-law Cutler.

The day after the tournament, Cutler decides to let Mike stay with Lincoln, and Mike leaves Las Vegas with his father to start their new life together.

LONG VERSION:
Lincoln (Sylvester Stallone) and Mike (David Mendenhall) build a good father-son bond during their drive to California, and Lincoln even teaches his son how to drive his truck and how to arm wrestle. However, when they arrive at the hospital where Christina (Susan Blakely) is getting her heart surgery, they find out that Christina died on the operating table earlier that day. Mike runs outside crying and stops at Lincoln’s truck, and after Lincoln catches up to him, he tells his father that he blames him for making him come along in the truck because it prevented him from getting a flight here and getting to his mother sooner. He tells Lincoln that he has never been around when anybody needed him, then he gets into a nearby taxi and has the driver take him to the mansion of his grandfather, Cutler (Robert Loggia).

A day or two later, Lincoln shows up at Christina’s funeral, but he is only there long enough to leave a bouquet of flowers on her coffin and exchange looks of sadness with his son before walking away. However, that night, he remembers the promise he made to Christina before she died where he agreed to look after Mike no matter what happens, so he drives his truck up to the front gate of Cutler’s mansion. He tells the guard there that he wants to speak to Cutler and see his son, but the guard tells him he is not wanted here and he will call the police if he doesn’t leave immediately. Lincoln hops into his truck and backs it down the driveway, but then he stomps on the gas pedal and plows right through the gate and across the lawn until he hits the front door. He goes inside and calls out for Mike, but he finds his son standing at the top of a staircase with the enraged Cutler. Lincoln asks for Mike to come with him, but Cutler furiously asks if he truly thinks that he can just come in here, destroy his home, take Mike with him, and expect to get away with it all. Cutler declares that Mike is his boy, and points out to Lincoln that he deserted him years ago and that’s a fact he can’t change no matter what he does. As Lincoln moves towards Cutler, Cutler’s men appear and restrain him, and Cutler keeps Mike from going to him. The cops then show up, cuff Lincoln, and take him to jail.

The next day, Cutler’s secretary Salanger (Chris McCarty) meets with Lincoln in the visiting room and explains to him that Cutler won’t press charges against him if he signs over custody of Mike to him and then gets out of California and never returns. Lincoln asks Salanger what Mike thinks about all of this, and Salanger informs him that he brought Mike here, so he can ask him himself. Mike enters the room and tells his father that he essentially forgives him for his past mistakes, but he also tells him that he can’t provide him with the stable and secure life he needs given what his line of work is, so he wants to stay with his grandfather. Lincoln decides to accept his son’s decision, so he gives Salanger the green light to draw up the necessary custody papers, and he signs them before getting released.

Lincoln drives off to Las Vegas to participate in the International Arm Wrestling Championships being held at the Hilton Hotel. When he arrives in the city, he sells his truck for $7,000, then he goes into the Hilton and up to one of the betting counters, where he puts all of the cash down on himself to win despite the fact that the odds on him are 20 to 1. He then proceeds to power his way through the tournament until he is among the eight semi-finalists, with one of the others being his rival and five-time defending champion Bob “Bull” Hurley (Rick Zumwalt). Meanwhile, Mike rummages through his mother’s belongings until he finds a zipped-up purse, and inside of it, he finds all of the letters that Lincoln had wrote to him over the years but never reached him. Knowing now that his father has always cared about him and that his grandfather hid these letters from him and really did drive a wedge between his parents, he steals a truck from the garage and drives off the property with it, and he heads in the direction of the airport so he can fly out to Las Vegas to reunite with Lincoln. One of Cutler’s men spots him leaving and tries to pursue him along with another goon, but Mike has a good head start on them and is able to reach the terminal and board a plane. After the two men find the abandoned truck outside the terminal, they notify Cutler about what his grandson has done, and knowing that he is trying to get to his father, he orders them both to ensure that he never reaches the Hilton. However, when they try to catch him at the airport in Vegas, he is able to evade them and get to the hotel without trouble.

Lincoln sustains his first loss in the semi-finals, leaving him only one loss away from elimination. As he leaves the competition platform, Cutler – having shown up there to find Mike himself – spots him and orders his top henchman Ruker (Terry Funk) to get Lincoln up to his hotel room so he can talk to him. Ruker finds him as he is getting his arm tended to (having started to sustain a tear somewhere in the crook of his elbow) and tells him that Cutler wants to see him in the presidential suite, and after finding out that he has a half-hour to spare before his next match, he tells Ruker that he will be there. Shortly afterwards, Lincoln goes up to the suite and asks Cutler what he wants, so Cutler first takes him outside and shows him a top-of-the-line semi-truck parked in the parking lot below, which is of a finer quality than the semi-truck being offered as a prize in the tournament. Cutler then hands him a check for $500,000 before telling him that he can have both of these things on the condition that he cuts off all contact with him and Mike forever. Lincoln asks him what more he wants from him, given that he signed over custody of Mike to him, and Cutler replies that he is just trying to make things easy for him. He tells Lincoln to take these two things and start a new life and start his own family, but Lincoln stuffs the check back into his pocket and tells him that Mike is his family, and when this contest is over, he is coming to get him. He then heads back to the competition, beating up Ruker when he tries to keep him from leaving.

Lincoln and Hurley make it to the final match, and while Lincoln is getting himself ready for it, Mike finds him. He tells his father that he wants to stay with him, but Lincoln tells him that, while he wants him to stay as well, he doubts that his grandfather is going to let that happen, plus he has no money and he sold his truck. Mike replies that that is fine because he said he was going to win this tournament and thus win the truck and start his own trucking company, but Lincoln replies that he is going up against Hurley soon and he hasn’t lost in five years, and also, he believes he suffered an injury to his arm, so he very much doubts that he is going to walk away victorious. Mike criticizes him for not living up to his beliefs of never giving up and going out and getting what you want because the world meets nobody halfway, and he tells his father that now is his chance to prove himself. He also adds that he doesn’t care anymore about what happened between them in the past, so he can stop trying to prove himself to him, and it doesn’t matter if he wins or loses because all he cares about is being with him, and he loves him. Lincoln tells him he loves him, too, and they hug, and he promises that he will try to conquer Hurley.

Lincoln locks hands with Hurley, and before Hurley can bring his arm down, Lincoln’s hand slips free, which necessitates the need for the referee to tie a strap around their hands and wrists before they go at it again. As Mike is cheering from the audience, Cutler and his men find him, and Cutler tells him that they are going home as soon as this match is finished. Lincoln and Hurley have an incredible struggle until Lincoln is able to get his fingers over the top of Hurley’s hand, which enables him to overpower Hurley and defeat him, winning him the world championship, the semi-truck, and a $100,000 cash prize as well (in addition to the money he won from the bet he placed on himself). Hurley raises his hand in respect, and Mike runs up to his father and celebrates with him. Cutler looks on at Lincoln and Mike, silently acknowledging just how much they care for each other and finally accepting that Lincoln is not the loser he long thought he was.

The next day, Cutler decides to let Mike stay with Lincoln, and Lincoln and Mike drive off in the new semi-truck to start their new life together. 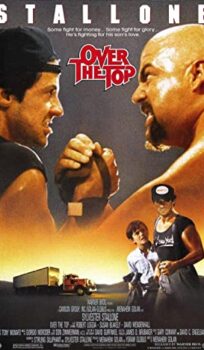