POOPER:
Oz the Magician saves the land of Oz. Oz and Glinda end up as a couple. Both Kunis and Weisz are the Wicked Witches, with Kunis becoming the green witch.

LONG VERSION:
Oz (Franco) is a small town magician at a traveling carnival/Fair. He is also a womanizer, liar and cheat. While trying to escape the husband of one of the women he’s been seducing he travels by hot air balloon, through a storm and crash lands on Oz, Where he meets Theodora (Kunis). Theodora informs Oz that he is the “Great Wizard” who was foretold to be the one to save Oz from an evil witch. Knowing he’s no wizard, Oz (Franco) goes along with Theodora to the Emerald City because he is told that the Great Wizard King with be given rule of the Kingdom and unlimited wealth. On the way to Emerald City, he seduces Theodora. She implies that he will take her for his Queen, and he agrees (nervously feeling put on the spot).

Once in Emerald City, we discover that Theodora’s Sister, Evanora (Weisz), has been ruling and defending against the Evil Witch. Evanora tells Oz that to be King he must kill the Wicked Witch. Out of greed he agrees and takes his companion Finley the flying Monkey (Braff), to find the Witch. Along the way, he finds a small, destroyed village and only one survivor. The town had been filled with tiny living porcelain dolls. He repairs the doll, which she travels with them to find the Witch.

Oz finally finds the Witch, but it turns out that the supposed Wicked Witch is actually Glinda (Williams), the Good Witch. Evanora was actually The Wicked Witch all along. Meanwhile, Evanora convinces her sister Theodora that Oz lied to her, and used her. Broken hearted and through her sisters magic, he is turned green and ugly, vowing to kill Oz for hurting her.

Through a great deal of soul searching and convincing by Glinda that he is more than just a fraud, Oz decides to use his magic tricks to defend against the Wicked Witches’ attacks. He has the “tinkers” (builders) of Munchkinland build a projection machine that gives him the giant eerie projected head, they also build a hot air balloon and fireworks. When the Witches attack, Oz makes it appear he is escaping in his hot air balloon. Theodora destroys it, and Oz appears to be dead. Suddenly, Oz uses his machines to project his giant head, and because it is a projection, none of the Witches’ spells can hurt him. Fireworks shoot from the projections mouth, and all the people of Oz, as well as the Evil Witches, assume Oz is immortal.

Oz and his friends set up a great hall in the Emerald city that projects his face and prepares for any future attacks from the Witches’. He and Glinda kiss. He gives each of his new friends gifts.

**Side note: While Oz is a magician at the Fair, it is implied he had an affair with and or cared about a woman named Annie. She informs Oz that unless he objects, she will marry Mr. Gale. It is implied she is Dorthy Gale’s mother. 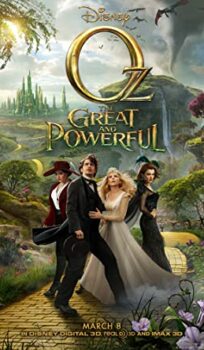