Upon doing her homework about Carter (Michael Keaton) and working her way into the room of the fancy hotel where he was staying using Drake’s (Matthew Modine’s) identity, Patty (Melanie Griffith) finds an array of legal and banking documents Carter had obviously been able to access for his delinquent purposes.

Then, she calls Drake and warns him to cancel and freeze all of their cards and accounts, makes a sizeable room service order, grabs all the cash found in the room and leaves.  On her way down, though, she briefly runs into Carter, who, after seeing his room trashed, realizes it was her and what she had done and runs after her, just as she is boarding a taxi back to the house.  The Hotel Management, having caught up to Carter’s scheme, tries to stop him as he is going after Patty, and ends having him arrested.

Carter, however, is able to con his way out by sweet-talking Florence Peters (Tippi Hedren, Melanie Griffith’s real-life mom), his obvious new victim, into posting his bail.  He decides to exact revenge on the couple.  So, he attacks the wounded Drake with a golf club and sneaks on and terrorizes Patty while she tries to make repairs to the first-floor apartment.  A struggle between them ensues, during which Drake sneaks onto the crawling space between that apartment and the basement.  Eventually, both Drake and Patty get the upper hand and kill Carter by forcing him to fall backwards on an exposed sharp pipe and getting impaled on it.

Some time later, after having fully repaired it, Patty and Drake are seen putting the building up for sale, and a couple shows interest in it and discuss privately about making a purchase offer of $850,000 -$100,000 more than what they paid for, originally-. 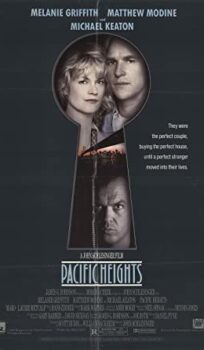