Pooper:
Raleigh manages to get through the portal and detonate his jaeger to destroy the aliens and the portal itself, escaping bak to Earth just in time. The world is saved (assuming no sequels).

Long Ending:
Aliens open a portal at the bottom of the ocean from which giant monsters called “kaiju” arrive to attack the Earth (nothing can go through the portal the other way, nor can the portal be destroyed from Earth’s side). As a response, the world governments pool resources to build giant robots called “jaegers” to fight and kill the monsters. In a process called “drifting,” the jaegers are mind-linked to two pilots (who are mind-linked to each other). The reason is that one person is incapable of controlling an entire giant jaeger themselves. Although the jaeger plan works initially, each new kaiju is more powerful and adaptive than the one before, and the kaiju ultimately begin beating the jaegers on a consistent basis. On one such occassion, a kaiju destroys the jaeger piloted by Raleigh Beckett (Charlie Hunnam) and his brother Yancy. During the battle, Yancy is killed and  though Raleigh  survives (and kills the kaiju), he retires.

Soon after, the world government decides to abandon the jaeger program and instead  build giant walls around the world’s coastlines. Stacker Pentecost (Idris Elba), the commander of the yaeger program, is given leave to use the last existing yaegers (models from Australia, China, Russia, and Raleigh’s rebuilt American yeager) as he sees fit from a base in Hong Kong, but no more will be built. Stacker convinces Raleigh to return to launch one last assault on the portal Their plan is to drop a nuclear bomb inside it when one of the kaijus emerge from it, intending for the explosion to destroy the portal.

Stacker has two zany scientists working for him. Dr. Newton Geiszler (Charlie Day) researches kaiju organs that are harvested after a kaiju is killed, but his research is largely dismissed. His prized possession is a damaged but still living kaiju brain. The other scientist, Dr. Gottlieb (Burn Gorman), is the one who devised the plan to destroy the portal and also has determined that soon, multiple kaijus will be able to come through the portal and ultimately a kaiju will be sent through every minute. Meanwhile, the newest kaiju easily breaks through the new coastal barrier walls and it is clear that the jaegers are the only means of saving the Earth.

Newton sets up a machine allowing him to drift with the kaiju brain and he learns that the kaiju are genetically engineered by aliens to destroy the human population. Once the kaiju have decimated humanity, the aliens will come through the portal and live on Earth. Unfortunately, the drift allow the aliens to see into Newton’s brain and learn a bit about the jaeger operation. Intrigued by Newton’s discovery and wanting more intel, Stacker orders Newton to go acquire an undamaged brain from notorious gangster and organ harvester, Hannibal Chao (Ron Perlman).

At the same time, Raleigh bonds with a young girl named Mako Mori (Rinko Kikuchi)  who is Stacker’s top student. They finally are allowed to work as co-pilots, but their first test of operating a jaeger is disastrous as Mako can’t rein in her emotions (her parents were killed in a kaiju attack and Stacker, then a jaeger pilot, saved her and raised her as her own). They are not allowed in battle unless Mako can handle the drift process.

The other three jaeger teams are sent to fight a newly-emerged kaiju, but are ambushed by a second one that also came through the portal. The Chinese and Russian jaegers are destroyed (and the pilots killed). The Australian jaeger is incapacitated when one of the kaijus surprisingly uses an EMP power to short circuit the electricity powering it (and also breaking one of the pilot’s arms). The US jaeger is powered by an internal nuclear reactor and is therefore the last hope. This time, Mako handles the drift expertly and she and Raleigh successfully kill both kaiju and rescue the Australian jaeger and pilots.

Realizing that there are only a few hours until the next attack, the remaining two yaegers are deployed to the portal, with Stacker replacing the injured Australian pilot. Meanwhile, Newton recovers a pure kaiju brain (although Hannibal is eaten in the process) and he and Gottlieb drift with it. They discover that the only way the jaegers can enter the portal is to use a kaiju carcass to open it (the portal only responds to kaiju DNA).

The portal is guarded by three incredibly powerful kaiju. Realizing they can’t beat them in battle, the Australian jaeger detonates its atomic bomb, killing all but one of the kaiju and sacrificing the two pilots. The U.S. jaeger kills the final kaiju in battle and uses its body to open the portal and enter it (planning to overload and explode the jaeger’s nuclear core). Once in the portal, Raleigh ejects Mako from the jaeger and back to Earth to make sure she lives through the experience. Raleigh manages to pilot the jaeger himself  to the other side, overloads the core, and manages to eject himself back through the portal to Earth just as the explosion destroy the aliens and the portal itself.

Humanity is saved and Raleigh and Mako are both safely recovered.

Post-credit scene – We watch as Hannibal Chao  miraculously cuts his way out of the stomach of the carcass of the jaeger that ate him. 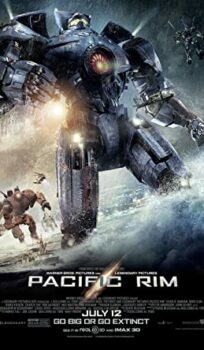