Paddington wants to raise money to buy a London pop-up book for Aunt Lucy’s 100th birthday, but the book is stolen by the actor Phoenix Buchanan, and Paddington is framed for the crime.

While the Brown family works to prove Paddington’s innocence, the bear makes friends in prison and changes the heart of some of the inmates. He ends up breaking out of prison when he is led to believe the other inmates will help clear his name, but they just want to skip town. Paddington learns from the Browns that Phoenix is the thief, and they are going to catch him from Paddington Station.

The family goes after Phoenix and they manage to catch him and have him locked up, allowing Paddington to be free. Although upset that he couldn’t get the book for Aunt Lucy, the Browns and their neighbors surprise Paddington by having Aunt Lucy flown into London so that she may get an authentic London experience. 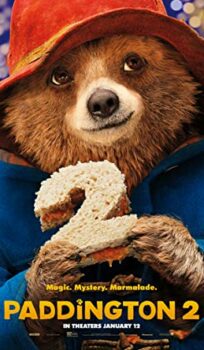