Sometime in the future, earth is running low on resources, and humanity is warring over whats left. A far away planet is discovered that is suitable for human life, so a massive ship, carrying tens of thousands of people are sent to colonize it. Its a long journey, so only a small portion of the crew take turns staying awake to run the ship, while the rest sleep.

Two crewman, Bower (Ben Foster) and Peyton (Dennis Quaid) wake up with a case of amnesia and find themselves cut off from the bridge. They soon find out that the ship is infested with humanoid monstrosities. After some near misses and some exploring, Bower discovers that these monsters use to be the passengers on the ship, and also finds other survivors that have not mutated, including a woman (Nadia) who helps Bower find and reactivate the ship’s core.

In the end, Bower and Nadia confront Peyton. It turns out that Peyton isn’t really Peyton at all, but Gallo, who was with the waking crew when they received news that the Earth had been destroyed. At the time, Gallo was already showing signs of a psychological illness associated with prolonged space travel, called Pandorum. The sudden trauma from hearing the news, mixed with the Pandorum caused him to go insane and slaughter the other crew members. After that, he decided to play god and attempt to make humans stronger. During the trip, the sleeping passengers were given a drug that alters their body, allowing them to adapt to the atmosphere of the new planet, however, Gallo increased the dosage on some of the passengers, then let them loose in the ship’s huge cargo bay. This caused them to fight each other for survival, cannibalizing other passengers, and eventually mutating and adapting to survival on the ship.

It turns out that the ship has arrived on the planet for years, having sunk to the bottom of a lake, but no one knows about it except for Peyton/Gallo.

A fight ensues between the three, thinking that the mutants are about to break into the bridge, Bower opens fire, and causes the ship to flood, forcing the ship to carry out emergency ejection of all the sleeping pods. Bower and Nadia escape to his pod, and are ejected to the surface as well.The mutants are presumably drowned but the sleeping passengers float to the surface to safety.

The film ends with Bower and Nadia looking at the new world as the other pods surface. 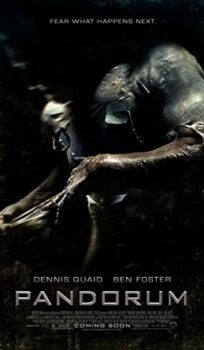