Submitted by Forger of Crimson Earth

Norman learns that the witch hanged by the townsfolk of Blithe Hollow was a scared little girl named Agatha Prenderghast, who had the same power he does.  Her curse is not to punish the modern people of the town, but those who judged, testified against, and executed her; as hideous zombies they are subject to the same shunning and brutal treatment she was at the end of her life.  The rite to keep her away for another year was simply reading the bedtime story her mother once did, putting her to sleep for a while.

With the help of the lead zombie, Norman finds the witch’s grave, and confronts her with a new story: her own.  as he proceeds, he points out that over the centuries, she has become consumed by her wrath, and has become a bully, no better than the townsfolk she has raised from the dead–perhaps even worse, as the zombies understand their mistake now, and only want to set things right and be laid to rest once more.

He convinces Agatha to let go of her anger, and she passes on for good, the zombies quickly following.  The destruction is reported on the news as a freak storm, but the townspeople know Norman to be a hero, and in the end Norman sits and watches TV with all his family, including his deceased grandmother, whom his father leaves space for and greets, even though he can’t see her. 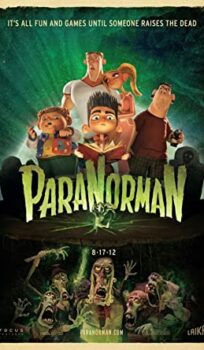