A lot of life stories in this one movie, so here goes.

• Gil (Steve Martin) gets fired. His boss’ reason? Because of the way Gil’s personal life was crossing over into his professional life. Gil then gets his job back when he finds out that his wife is pregnant, but his boss actually begs to have him back. Gil and his wife Karen (Mary Steenburgen) end up having the baby. Gil’s vindication of being a great father is fulfilled when his son, Kevin (Jasen Fisher), actually catches a pop fly at his little league baseball game.

• Gil’s brother, Larry (Tom Hulce), who has a gambling problem, decides to leave his son, Cool (Alex Burral), behind with Cool’s grandparents. Larry says he is leaving for  South America “for a great business opportunity” to the chagrin of his father (Jason Robards) and mother (Eileen Ryan).

• Gil’s sister, Susan (Harley Jane Kozak), and her husband, Nathan (Rick Moranis), are separated after differences in raising their daughter, Patty ( Ivyann Schwan). The couple gets back together after Nathan serenades his wife in front of her high school students.

• Tod and Julie (Keanu Reeves and Martha Plimpton) stay together (despite many fights and Tod still drag racing) and they end up having a baby.

• Julie’s brother, Garry (Joaquin Phoenix), realizes the father that left them is a loser, and eventually realizes that his mom, Helen (Diane Wiest), is really cool.

• Helen and George (Paul Linke) continue their relationship, and they are the parents of the baby that arrives at the very end of the film. 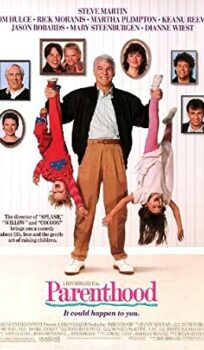