Richard Benson (William Holden) finishes the script and then rejects Gabrielle (Audrey Hepburn) convinced he’s not good enough for her. The next day, he wakes up and finds her gone, but she’s purposefully left her bird behind.. He goes after her, finds her, returns the bird, tells her he’s going to rewrite the script, into something that’s actually good, and then they kiss.

(The script, scenes from which, take up at least half the film, ends with Rick, being shot, just as he and Gaby are about to escape. Police Inspector Gilet (Grégoire Aslan) disillusioned, quits, which promotes Philippe (Tony Curtis) from second policeman to first. None of this is supposed to be serious, and is meant to be funny.) 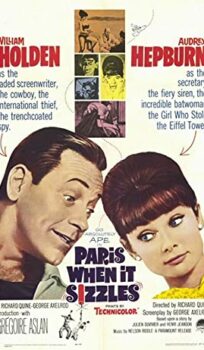