This short story shows how storks deliver babies. Each stork is assigned to an animated cloud in the sky. Each cloud forms wisps of cloud puffs into the shapes of babies. The cloud then zaps it with electricity, giving life to the shape, creating a baby, either human or animal. Most clouds are talented and create wonderfully cute and cuddly babies. One cloud even creates a football for its stork to deliver along with the baby to its parents on earth. The stork then puts the baby into a white diaper sack, and flies down to earth to deliver the baby to the expecting parents.

One spastic stork is assigned to a not-so-bright cloud that doesn’t seem to be able to create anything cuddly. The cloud always seems to create babies of ferocious or dangerous animals, such as alligators, porcupines, rams etc. Yet, this stork that is paired up with this cloud still flies off valiantly with the dangerous animals to deliver them to their parents, despite getting pricked, rammed, bitten, and beat up by the baby animal in some way or another as they fly away to be delivered.

Eventually, the dim cloud is about to create a very wild animal. Seeing what it is about to deal with, the stork appears to give up, and it flies off to a nearby cloud that creates cute cuddly puppies. The dim cloud at first gets mad (lightning and thunder) and then feels dejected and sad (cries rain).

Surprisingly, the goofy stork returns to its assigned cloud, but this time the stork is sporting a football helmet and shoulder pads. The stork had gone to the cloud that created the football earlier and asked for this new protective gear to keep it safe from this and any future abusive baby animals that his cloud partner produces.

With a smile on its face and with a new determination, the stork proudly waits for its next package. The dim cloud is happy again, and his stork buddy flies off to continue its delivery rounds. 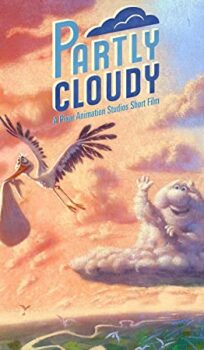