Submitted by Kathy B

Passionada is about Charles Beck, (played by the ever wonderful Jason Isaacs), a loser and gambler living off of the largesse of his friends Lois and Daniel Vargas (Theresa Russell and Seymour Cassel respectively). He meets and falls in love with a Fado (Portugese blues singer) and widow named Celia Amonte (Sofia Milos). Her husband was a fisherman lost at sea. She also has a rebellious teenaged daughter Vicky (Emmy Rossum) who hangs out at casinos and agrees to help Charlie date Celia if he will help Vicky learn to do the one thing Charlie’s good at – card counting.

Charlie, with Vicky’s help and the Vargas’ money, is able to push all of the right buttons with Celia. Lying through his teeth he wins Celia’s heart. The long and short of it is – Charlie ultimately refuses to corrupt Vicky with his card counting ways, tells Celia the truth, and loses Celia.

In a cute denouement, Charlie leaves a trail of fish from Celia’s dressing room to a pier where he has found a job scaling fish. He wins Celia back by telling her he will take this or any legitimate job and that he will continue to be around as long as it takes to convince her he has turned over a new leaf.

When we see them at the end Vicky is with the good boy “next door”, Charlie and Celia are married and  Charlie has found the perfect job – manager of a casino where he identifies card sharks and Celia sings.

This ending was actually created out of an original ending and one new scene – the scene on the pier outside of her nightclub where he is scaling fish.

Now what you’ve just read is the “primary” version. But there is a second alternative ending, which is really the one they originally shot. The director, Dan Ireland and all the principles hated the original ending (which I am about to explain) so much that a year later they reunited to reshoot what is now the “primary” version. They didn’t shoot what they wanted the first time because their producer (the guy with the money) was in the hospital at the time they realized they didn’t want to do it.

Originally, instead of finding respectable work and convincing Celia he had changed, this is what happens:
Charlie, after confessing to Celia and losing her gives up. He packs his bags and leaves, but not before running into Vicky. She follows him out of town and catches him having one more gambling fling where he beats a couple of Russian card sharks at their own game. Vicky spots Charlie at the table and Charlie gestures for her to meet him outside. The Russian guys nab Vicky and threatens her. Charlie offers them everything he has – their winnings, his savings, everything – which they take, release Vicky and grab Charlie. Vicky follows the Russian guys’ car to where they dump a severely beaten Charlie down by the docks. She gets him to the hospital. Charlie’s in a coma. (Alright, I told you they didn’t like this ending either, so stop gagging). Celia visits him every day until one day he wakes up. Ta dah! Same ending in casino where Charlie has his new job, married to Celia. If you look closely you will notice a little scar on Charlie’s left temple (?) which doesn’t fit with the new ending but was from the original one. The principles hated the soap opera ending so much that Isaacs stayed up 36 hours after completing Peter Pan to fly in just so they could shoot the scene at the pier they needed to create the improved version. 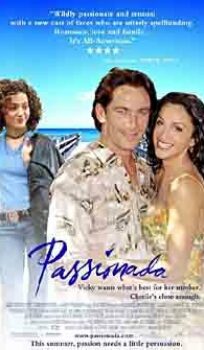