POOPER:
In 2013, brothers Dzhokhar and Tamerlan Tsarnaev detonate two homemade bombs near the finish line of the Boston Marathon, killing three people and injuring many others.  After a manhunt lasting several days, the Boston police and FBI catch up to Dzhokhar and Tamerlan in the city of Watertown, where they get involved in a shootout.  Tamerlan is killed and Dzhokhar is later captured hiding inside a boat.  He is convicted on thirty counts and given the death penalty.  Dzhokhar’s college roommates are also imprisoned for obstructing an investigation, and Tamerlan’s wife Katherine continues to be investigated as an accessory.

LONG VERSION:
On April 15, 2013 (Patriots Day in Massachusetts), brothers Dzhokhar and Tamerlan Tsarnaev detonate two homemade bombs near the finish line of the Boston Marathon.  Three people are killed in the explosions, and several others are seriously injured.  The story follows the actions of the Boston police and FBI in their search for the bombers, as well as others who were injured in the explosions or were involved in the capture of the Tsarnaev brothers.

Boston PD Sergeant Tommy Saunders (Mark Wahlberg) is assigned to the security team at the marathon.  Married couple Patrick Downes and Jessica Kensky are spectators watching the race.  Steve Woolfenden and his young son Leo are also spectators as they cheer on Steve’s wife Amber, who is running in the marathon.  Meanwhile, Dzhokhar Tsarnaev (Alex Wolff) and his brother Tamerlan (Themo Melikidze) are planning something in the name of Islam.  Tamerlan’s wife Katherine Russell (Melissa Benoist) is caring for their daughter while she looks on.  Hours later, the brothers arrive at the finish line of the marathon, each carrying a backpack.  They split up, and both drop their backpacks a few blocks apart before disappearing into the crowd.  Minutes later, the backpacks explode, causing widespread panic amongst the spectators and runners.  Patrick and Jessica are both severely injured and sent to separate hospitals, and both will have to have a leg amputated.  Steve is also injured, but Leo is not hurt.  A medic tends to Steve while a cop takes Leo to safety.  It would be days later before both duos are reunited.

As a result of the explosions, the race is immediately stopped, and the area around the finish line is cordoned off as a crime scene.  FBI Special Agent Rick Deslauriers (Kevin Bacon) is in charge of the investigation, and after learning the details of the incident, he quickly determines that this is the work of terrorists.  However, he doesn’t want to officially call it an act of terrorism because it could create even more panic in the city.  Now back at home, the Tsarnaev’s are watching the news reports about their attack, and both decide it would be best to lay low for a while.  Tommy is also back at home, and after sending away his neighbors who want to know who was responsible, he breaks down in tears in the arms of his wife Carol (Michelle Monaghan) and tells her what he saw and his need to catch whoever did this before it happens again.

The next day, an analyst reviewing footage sees the Tsarnaev brothers, and as a result of their actions in the video, are now suspects in the attack.  Deslauriers is hesitant to release their pictures to the public, since they don’t know for sure they are the bombers, but Boston Police Commissioner Ed Davis (John Goodman) demands their release.  The Boston Police and the FBI are arguing whether or not to release the pictures, but the matter becomes moot when they’re leaked to the press.  Meanwhile, Dzhokhar’s college roommates are smoking weed in their dorm.  One of them goes into Dzhokhar’s bag looking for more, but instead finds bomb-making materials, such as fireworks, BBs, and Vaseline.  That night, Dzhokhar and Tamerlan, knowing that everyone is looking for them, are attempting to flee the city when they see Officer Sean Collier (Jake Picking) inside his police car.  Tamerlan uses his gun to shoot Sean while Dzhokhar tries to take his sidearm.  They kill Sean, but are unable to get his gun.  They then carjack Dun Meng (Jimmy O. Yang), a Chinese exchange student.  As they are driving, Tamerlan tells Dun that they are responsible for the marathon bombing and are planning another attack in New York.  Since the car is low on fuel, they pull into a gas station, where Dun is able to get away.  He runs to another gas station and has the clerk call 911.  Tommy is the officer who responds, and Dun tells him what the brothers said to him about the bombing.  He then gives Tommy his GPS tracking number so the police and FBI can find them.

The car is found in the nearby city of Watertown, and as the local police surround the car, a shootout begins between them and the brothers.  Watertown PD Sergeant Jeffrey Pugliese (J.K. Simmons), who was conducting his own investigation of the bombing, heads to the shootout, as does Tommy.  In the shootout, Tamerlan is shot several times, but Dzhokhar is able to get back into the car and drive away.  During his escape, he runs over Tamerlan with the car, killing him.  The next day, the governor orders the entire city of Boston on lockdown while the police and FBI search for Dzhokhar.  His college roommates, as well as Katherine, are arrested and taken into custody.  The roommates were oblivious to what Dzhokhar was doing, but they are eventually imprisoned for obstruction of an investigation because they didn’t report the bomb-making materials to the authorities.  Katherine is interrogated for several hours, but refuses to divulge anything concerning the actions of her husband and brother-in-law.  The FBI end the questioning knowing that she had to have had knowledge of the attack, but they don’t have enough to charge her.

That evening, David Henneberry, a resident of Watertown, realizes that someone is hiding inside the boat he has parked in his backyard and calls the police.  Tommy arrives at the scene, and determines that it’s Dzhokhar hiding in the boat.  More police and the FBI arrive, and another shootout happens, but this time Dzhokhar surrenders.  When word of his capture spreads, everyone celebrates.  Later, the police and FBI are honored at a Boston Red Sox game.  Their star player David Ortiz gives a speech, and it’s during that speech that the term Boston Strong, which had started to appear a couple of days into the investigation, goes nationwide.  Title cards reveal that Dzhokhar Tsarnaev was convicted on thirty counts and given the death penalty, and Katherine is still under investigation for her possible involvement in the attack.  The movie ends with testimonials of the actual marathon bombing survivors, then with photos of the four people (including Officer Collier) who were killed by the Tsarnaev brothers. 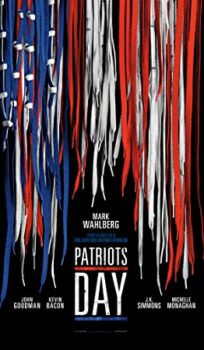