Paul (Seth Rogen) is an Alien who has been helping the US government since his ship crashed 60 years ago,and he decides to escape after he finds out he is due to be dissected for his healing and telepathic powers. He runs into Clive (Nick Frost) and Graeme (Simon Pegg) who are on holiday for Comic Con and a visit of Area 51. On the way they pick up Ruth (Kristin Wiig), a Creationist after she sees Paul and has her faith challenged. They end up at the house of Tara (Blythe Danner) who was the person who tended to Paul’s wounds when he first crash landed and she was a girl. However, no one believed her story and she became a recluse.

They are pursued by FBI Agent Zoil (Jason Bateman) and rookie agents Haggard (Bill Hader) and O’Reilly (Joe Lo Truglio), plus Ruth’s God fearing dad. The whole gang escape their pursuers to the iconic site from Close Encounters of the Third Kind.

Haggard dies driving off a bridge, O’Reilly severely burnt in a house explosion, and Agent Zoil’s Boss (Sigourney Weaver) decides to take matters into her own hands and faces off against the gang. It turns out Agent Zoil was the one who helped Paul escape and was trying to get him home. The Boss wounds Zoil, but she is taken out by Ruth. However, her dad arrives and kills Graeme accidentally with a shot meant for Paul. Paul heals Graeme with his power, but the Boss recovers and is about to shoot someone when Paul’s ship arrives and crushes her with the landing platform. Paul leaves with Tara, giving her a new start.

The film ends with Comic Con 2 years later, both Graeme and Clive successful and adored by fans after their book about Paul. 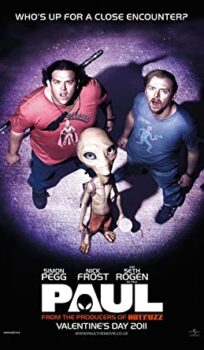