Even though Droz (Jeremy Piven) and the rest of his Pit crew throw a rager of a party with the P-Funk All Stars and George Clinton, President Garcia-Thompson retakes the house anyway with a number of complaints.  However, with the help of what Tom (Chris Young) overheard from some delegates on campus, they figure out a way to get her fired.

Next day at a campus presentation, Droz and Gutter (Jon Favreau) cause a whooping crane, the school mascot, to run loose, forcing President Garcia-Thompson to chase after it.  While she does, Droz takes the mike and explains to the students that he thought they were finally working together in unison, instead of their little clicks.  He eventually leads them in a protest of “We’re Not Gonna Protest”, which President Garcia-Thompson cannot control.  This leads to her getting fired on the spot.

Rand McPherson (David Spade) gets to the stage and yells at Droz about his “new friends” and begins cutting down every group in detail…unaware that Droz has hidden the mike under his arm.  He and Gutter bolt as all the students begin to gang up on Rand, who starts to panic.

Later on, Tom is about to face “initiation” when his bus arrives to take him back to his original campus.  Droz says he’ll get him next year, and Tom leaves, but not before snagging a kiss from Katy (Megan Ward), who he apparently hooks up with.  Droz hooks up with Samantha (Sarah Trigger), despite the fact that he and some Pit roomies trashed her aunt’s car the night before (they thought it was Rand’s).

The movie ends with Tom happily sitting in his bus as Rand is chased along the campus by a huge mob of students…just like he was over the course of the film. 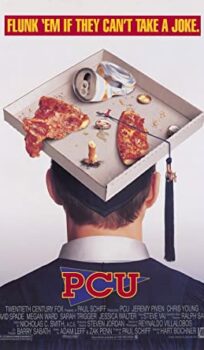