Upon seeing that fellow worker Erik (Bjorn Granath) -the one who suffered the accident which rendered him mindless- is being taken away from the farm, Pelle (Pelle Hvenegaard) compells his father Lasse (Max von Sydow) to run away together; however, Lasse refuses to try starting anew anywhere else for being too old and tired.  But he lets Pelle go.

The last scene shows father and son saying goodbye to each other and going part separate ways; Lasse goes back to the farm, and Pelle is seen running towards the beach, along the coastline, probably waiting for a ship to arrive. 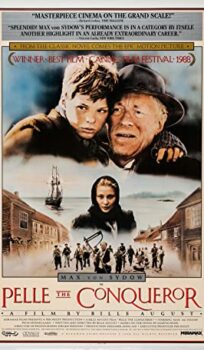