Marjane Satrapi is a young girl living in Iran near the end of the rule of the Shah. Her parents are dissidents and advocate for the founding of a democracy and the overthrow of the Shah. The Shah is overthrown and Marjane’s uncle Anoush is released from prison. In the first election, the Islamic Party wins with over 99% of the vote, and soon, war breaks out between Iran and Iraq. During the war, the Iranian government begins mass killings of dissidents – including uncle Anoush.

Marjane is sent to Austria to escape the violence. She tells everybody there that she is Egyptian. While there, she befriends a group of nihilists, meets a homosexual, loses her virginity and is crushed when her first love cheats on her. She ends up living on the streets. After a month of living off the grid, she is hospitalized, reconnects with her parents, and returns to Iran. Things are worse than ever, and when the Islamic Police bust one of her house parties, one of her friends die.

Marjane returns to Europe, this time going to France. When she arrives, she removes her headscarf. When she enters a cab, she  embraces her heritage and tells the cab driver that she is Iranian. 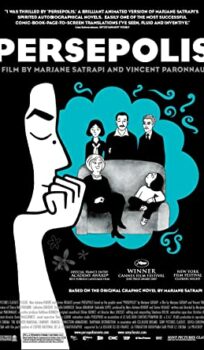