Martin Sixsmith (a real life person) has recently been fired from the Prime Minister’s staff and is pitched the idea of a story by the daughter of Philomena. She was raised in a convent and forced into indentured slavery for the abbey after she becomes pregnant; her son is also kept away from her and at age three, sold to adoptive parents without her getting to say goodbye.

Martin (Steve Coogan) and Philomena (Judi Dench) take a trip to the convent in Ireland, then to Washington DC after they learn he was most likely adopted by Americans.

There, they discover her boy had grown into an adviser for Ronald Reagan but died in 1995 of AIDS. Philomena is worried her son wanted nothing to do with her but they continue researching, meeting her son’s adopted sister and his former lover.

It is eventually revealed that he had requested to be buried in Ireland and had often visited the nuns to inquire about his mother but they withheld information.

They go back to the convent and the only woman old enough to have known Philomena as a teenager says that she didn’t give any information during their visits because Philomena was being punished for having sex out of wedlock. Martin despises religion and verbally attacks the hypocrisy but throughout the film, Philomena has kept an upbeat spirit and is able to forgive the nun.

Martin learns to be more open-minded towards Philomena, who he originally wrote off as uncultured. 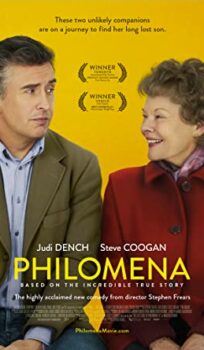