With his ping-pong champion brother Michael (Roger Fan) out injured and Harcourt (Peter Paige) poaching students from his mother’s (Elizabeth Sung) ping-pong class, Chris (Jimmy Tsai) decides to enter and win the ATTF Golden Cock Western Division Championship to keep the class in business (and, by extension, his father’s [Jim Lau] ping-pong supply store). He initially trains alone when his father doesn’t take his decision seriously, but his father soon changes his mind and helps him get into competitive shape; plus, the students in the class become better players by watching them train. Also, Chris starts to win the affection of Jennifer (Smith Cho), the older sister of his student Felix (Andrew Vo). The day before the tournament, Chris’ father gives him his old competitive ping-pong shorts to wear as his last rite of passage.

As Chris advances through the tournament, his friend J.P. (Khary Payton) – after overhearing two Chinese spectators deride Chris – uses his fluent Mandarin to tell them and everyone else in the Chinese audience all about how Chris has helped him and the students he teaches in different ways, and this results in the audience becoming fully supportive of him. Chris makes it to the final match along with Harcourt, and just before it begins, Chris’ student Prabakar (Javin Reid) comes up to him and presents him with the busted sneakers that he earlier threw away, which he has personally repaired and modified to better suit Chris and his playing style. When Chris asks if these sneakers are regulation ones, Prabakar informs him that the ATTF doesn’t have any rules regarding a standard uniform, so he puts the shoes on and changes into his basketball shorts and tank top.

Chris and Harcourt each win a game, but in the third and last game, Chris’ performance gets hampered when Harcourt – after having had enough of Chris trash-talking him – exercises an ATTF rule that results in him being forbidden to talk lest he be disqualified, and then he hurts himself soon after when he falls out of bounds while jumping to hit one of Harcourt’s serves. Feeling that Chris needs a boost of confidence, Jennifer gets out of the audience and goes up to Chris’ students and gets them to recite a Chinese cheer, and the audience soon joins in with them. His confidence strengthened, Chris beats Harcourt and becomes champion.

Some days after Chris’ victory, his mother’s ping-pong class experiences such an influx of students that some have to be turned away, and she remarks to Chris that she may have to seek out a bigger gymnasium. J.P. goes into business with Prabakar’s father, D.B. (Shelley Malil), who owns a textile company, and they turn the sneakers that Prabakar made for Chris into a hot-selling product. Chris is last seen riding with Miss Chinatown in the East Hills Chinese Parade (one of the perks of winning the tournament), but Jennifer – who is evidently his girlfriend now – throws a cinnamon bun at his head when she sees that he is about to hit on her. 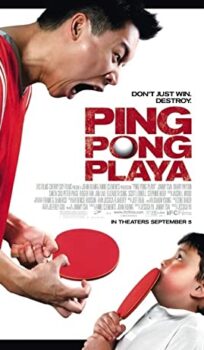