Pinocchio and Jiminy Cricket finally return to Gepetto’s house after several awful misadventures to discover that not only did he and his pets set out on
their own to look for the puppet-boy, but they’ve been swallowed (boat and all) by the whale Monstro. Pinocchio is swallowed too when he goes to search for him, but he also figures out how to free himself and the others – start a fire and make Monstro sneeze. This works, but it’s a desperate swim to shore for everyone as the whale pursues them. They make it to shore and the beast smashes against the cliffside. Jiminy discovers Pinocchio unconcious in the shallows.

As Gepetto and the others mourn the tragedy back home, we hear the Blue Fairy’s promise to Pinocchio that he would become a real boy if he proved himself “brave, truthful, and unselfish”. Since he clearly has, he is revived as a human and everyone celebrates. (Jiminy, as he thanks the Blue Fairy for her help from afar, unexpectedly gets a badge declaring him an “Official Concience.”) 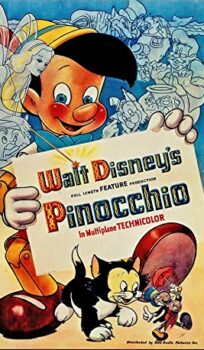