An underwater earthquake releases thousands of prehistoric piranha into a small coastal town during spring break.  Despite the attempted warnings by Sheriff Julie Forester (Elizabeth Shue) and Deputy Fallon (Ving Rhames), the piranha violently attack the spring-breakers causing complete mayhem, during which Fallon is killed when he attempts to kill off the piranha with a boat propeller.

Meanwhile, Julie’s son Jake (Steven R. McQueen) had snuck off with porn director Derrick Jones (Jerry O’Connell), who was also trying to recruit Jake’s friend Kelly (Jessica Szohr).  Jake noticed his younger siblings stuck on an island (they snuck to the island to go fishing and lost their canoe) and during the rescue attempt the boat hits a rock and begins to sink.  During the ensuing chaos, Derrick and one of his models is killed in a piranha attack.  Jake calls Julie for help and he heads over, accompanied by Novak (Adam Scott).  Julie ties a rope to the boat and instructs everyone to climb across, though Jake stays on the boat because he doesn’t want to escape without Kelly, who is trapped inside.  Julie and her kids barely make it across, even though Danni (Kelly Brook) dies when piranhas jump up at her and the rail supporting the rope breaks.

Jake ties the rope around himself and throws Derrick’s body into the water to distract the piranhas, while he swims into the boat to save Kelly.  Inside the boat, Jake opens some propane tanks and instructs Novak to drive his boat and pull them away on his signal.  Jake makes the signal and throws a flare into the boat, however Novak has trouble starting his engines.  The piranhas start coming towards Jake and Kelly, however Novak finally gets his engine started and pulls them to safety.  The propane tanks explode, killing all the piranhas.

After everyone is safely on Novak’s boat, Julie receives a call from Mr. Goodman (Christopher Lloyd), who warns her that the piranha that attacked the town were only babies.  Suddenly a giant piranha jumps out of the water and grabs Novak and the film ends. 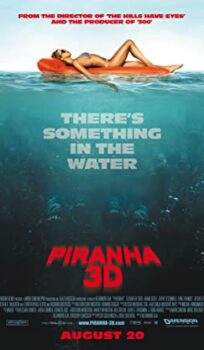