Submitted by Sean B

Steve Jobs (Noah Wyle) had little success selling early Apple computers to businesses and the general public due to a lack of understanding of the benefits of computer ownership and the complex user interface which dominated early models.

After catching the eye of Intel Corporation, Apple received a generous grant from which they started gaining market momentum. Shortly there after, Apple released the Apple II and their cult following began.

Bill Gates (Anthony Michael Hall) left Harvard for New Mexico in 1975 to pursue a business opportunity coding for the Altair 8800. Through his sharp business skills, Gates secured contracts that allowed only Microsoft to develop code and then lease it to the hardware manufacturer. The newly-formed Microsoft, Inc moved from Albuquerque to Washington. Soon after, Bill Gates pitched a fateful software contract proposal to the then largest computer company in the world; IBM.

In 1982 Xerox Corporation offered Steve Jobs a rare opportunity to view a new computer with a revolutionary way to interact with it; a GUI (Graphical User Interface) Steve Jobs then foolishly offered Bill Gates and Microsoft a sneak peak at Apple’s newest creation, “The Macintosh” in 1983. Apple’s new computer, with its innovative GUI, made what Microsoft was selling “Look like it was from the stone age” according to Steve Ballmer (John Di Maggio). Bill Gates then completely ripped off what Apple had done and incorporated it into his new Windows 1.0 operating system. An important fact often forgotten is that while neither man or company invented the GUI, Steve jobs only lifted the concept from Xerox.

Gates’ cut throat business tactics in the 1990s allowed Microsoft to eclipse Apple Computer, and several other companies including Netscape, in market share and software dominance.

In real life, despite these events, Steve Jobs and Bill Gates are actually good friends. 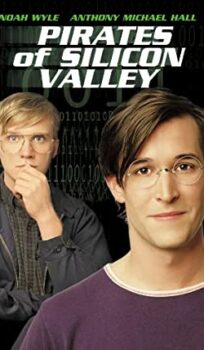