Pirates of the Caribbean: The Curse of the Black Pearl(2003)

Pirates of the Caribbean: The Curse of the Black Pearl

Just when you’ve had a belly-full of swashbuckling adventure and more double-crosses than you can count, Will Turner (Orlando Bloom) and Jack Sparrow (Johnny Depp) finally team up against Barbossa (Geoffrey Rush). Sparrow distracts Barbossa with swordplay, and Will sneaks back to the cursed treasure chest with the missing coin. Sparrow fires his single bullet into Barbossa’s chest as Will deposits the coin and a few drops of his blood into the chest. Barbarosa stands stunned, and he slowly realizes that now that as the curse is lifted, his wound will be fatal. The Pirates attacking the crew of the Dauntless, realizing that they too are now mortal again, surrender en masse (strange, considering that they’ll definitely be hanged for their crimes). Unfortunately, the crew that Sparrow picked up in Tortuga has made off with the Black Pearl, so he too is taken into British custody. Back at Port Royal, Will disrupts Sparrow’s execution, but the two of them are eventually cornered. Sparrow “escapes” by falling over a parapet into the ocean. When Commodore Norrington (Jack Davenport) realizes that Elizabeth (Keira Knightley) loves Will rather than him, he frees Will. The Pearl swoops in to snag Sparrow, and Will and Elizabeth share a long kiss that implies they will live happily ever after.

Sharla S. and Matt T. wrote in to let us know about a ‘bonus scene’ after the credits end: Jack the monkey is seen swimming back to the treasure cave and stealing a coin from the chest, thus re-activating the curse, and turning him into a skeleton-monkey. 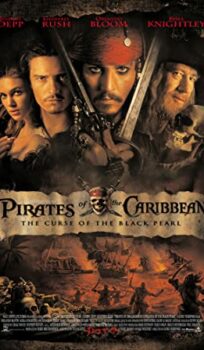