Over the course of the race, Dusty Crophopper (Dane Cook) earns the respect and friendship of most of the other racers. He saves the life of Bulldog (John Cleese) and helps El Chupacabra romance Rochelle (Julia Louis-Dreyfuss). At the midway point of the race, Dusty is leading.

Defending champ Ripslinger, along with his cronies Zed and Ned, starts cheating to hurt Dusty’s chances. Over the Pacific Ocean, Riplsinger’s gang knocks off Dusty’s antenna, making it impossible for him to communicate with the outside world or figure out where he is. He’s rescued by a pair of Navy jet planes (voiced by “Top Gun” co-stars Val Kilmerand Anthony Edwards), who lead him to safety on an aircraft carrier where he can refuel. On the aircraft carrier, he sees a photo of his trainer, Skipper (Stacy Keach). The photo shows that, far from being a hero in World War II, Skipper flew only one real mission during the war. He talks to Skipper via radio, and Skipper admits that it’s true- he’s only flown one military mission in his life.

Dusty takes off from the aircraft carrier, just as a storm hits. He knows he should fly high, above the storm, but he’s afraid of heights, and flies close to the oceans surface. Large waves strike him, and he sinks below the ocean. Luckily, a rescue copter finds him and brings him back to Mexico, where the final leg of the race will begin. Dusty is very badly damaged, probably beyond repair. It appears he won’t be able to race any more. SKipper, whom Dusty had idolized, admits the truth: in his one and only mission during WW2, he led a squad of young planes into a battle in which they were all killed. Skipper has felt too gulty ever to fly again.

The next morning, all the other racers who’ve come to like Dusty visit him and bring him spare parts that allow mechanic Dotty (Teri Hatcher) to fix Dusty better than new.Since there’s evidence Dusty’s antenna was tampered with, he’s allowed to fly in the final leg of the race, but with a huge time penalty. RIpslinger, Ned and Zed try to sabotage Dusty during the race, but old Skipper, who hadn’t flown since WW2, comes to Dusty’s rescue. Ned and Zed are disabled, leaving Dusty and Ripslinger vying for the lead.

As they approach New York City, where the race ends, Ripslinger builds a big lead. Dusty finally gets the courage to fly at high altitudes, where the tailwinds help him build up speed and make up the gap. Ripslinger doesn’t know that Dusty is close behind him, so as he nears the finish lines, he slows down and shows off for the camera, allowing Dusty to pass him and win the race.

At the end, champion Dusty and his coach Skipper are given a chance to take off together from the naval aircraft carrier. 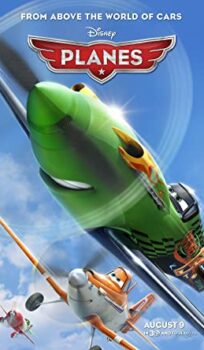