Submitted by Brad G., for doing the legwork on this one

Planet of the Apes

All of the apes and humans on the planet are the descendants of the crew of the Space Station Oberon, which crashed while searching for Leo (Mark Wahlberg). The two sides are battling furiously when Leo’s friend, the chimp Pericles, lands his spacepod in their midst. Realization of their true history brings peace and hope for the planet’s future. Leo’s only wish is to return home, so he leaves in Pericles’ pod, flies into the magnetic/time storm that put him there, and returns back through time to Earth of his day. He crash-lands the pod into the reflecting pool of the Washington, D.C. Mall, and walks up the steps of the Lincoln Memorial to see a statue of General Thade (Tim Roth) seated there. Earth is ruled by Apes. 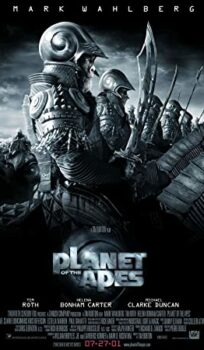