After Sgt. Elias (Willem Dafoe) stops Sgt. Barnes (Tom Berenger) from killing the villagers, Barnes shoots Elias in a later battle and tells everyone else that he was killed by the enemy.

Later while flying over the battlefield, Pvt. Taylor (Charlie Sheen) sees the Vietcong chasing a still-alive Elias, where they finally gun him down for good.

During a raid by the Vietcong on the Americans in the final scene, the commander calls in for the bombs to be dropped, killing nearly everyone there, both Vietcong and American, but securing the site. Both Taylor and Barnes survive, and in the aftermath, Taylor finally confronts and kills Barnes for Elias. 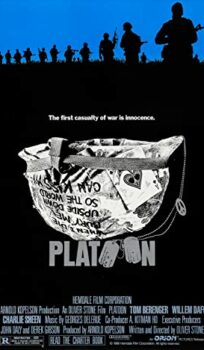