After Vince (Woody Harrelson), Cesar (Antonio Banderas), and Grace (Lolita Davidovich) arrive at the Mandalay Bay Hotel in Las Vegas, the guys take off to get ready for their fight while Grace meets with Hank Goody (Robert Wagner), the hotel’s manager (and lecherous sleazebag), hoping that he will invest in some of her inventions. However, it is clear from the outset that he is only interested in getting her into his bed. The guys are rushed into signing their contracts for the fight, which – unbeknownst to them – has the clause for a guaranteed middleweight title match for the victor written in such a way that it can be legally nullified.

Vince and Cesar enter the ring to a small crowd and little to no interest in them. Grace gets a seat in the front row courtesy of Hank, and she individually encourages both men to be strong and get the win. The fight gets underway, and as each round goes by, Vince and Cesar escalate their offense until they are viciously punching each other, enrapturing the spectators and making the press take notice, and one of the commentators eventually declares the battle worthy of being called “Fight of the Year”. Before the tenth and final round begins, Grace excuses herself from the fight, unable to bear the sight of them demolishing each other any longer, but she resumes watching the fight in the hotel’s bar. Eventually, the unrelenting punishment each man is giving the other spurs her to return to ringside by the time the round draws to a close, and when it ends, both guys are still standing and everyone in the arena is applauding them. Grace goes up to them individually and tells them that they fought brilliantly.

The judges end up declaring the fight a split draw, denying both men a title shot. When they get back to the locker room, they discover that their promised payday of $50,000 apiece has been reduced to $24,000 apiece, and Artie (Richard Masur) – the partner of the fight’s promoter Joe Domino (Tom Sizemore) – explains to them that the deductions went towards various expenses outlined in their contracts. He also says that Domino was impressed with their fight and they are back in his good graces, but when they ask if they can have a rematch with the same stakes in the future, he doesn’t give them a direct answer, obviously implying that it won’t happen.

After getting cleaned up and getting their wounds treated, Vince and Cesar go into the hotel’s casino to gamble their winnings on the roulette wheel, but thanks to a system Vince thought up on how to win big on it, they lose most of their money until Vince is left with $2,000 and Cesar with $11,000. Meanwhile, Grace attends the boxing event’s after-party to try to talk to Hank some more, but Hank gets her in a private setting and soon sexually propositions her. She slaps him, and he backhands her in response and cuts her lip before telling security to get rid of her, but she defiantly goes out the door on her own. She catches Vince and Cesar as they are about to leave in her car (she told them that she was going to stay in the city for a few more days to get her ideas sold and they could take the car home without her), and after she gets behind the wheel, they depart.

As the trio make their return to Los Angeles, Grace says that she knows now that she is better off being her own boss and she will just sell her ideas in Los Angeles instead. Cesar asks her who she thought won the fight, and she replies that she considered it a fair decision. The guys express how glad they are for both the money they still have and how the crowd enjoyed their match, and Grace tells them both that she loves them. 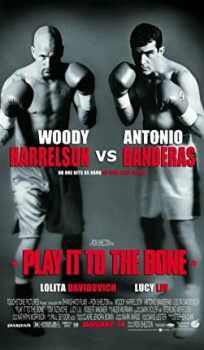