On their second day at the fire depot, Brynn (Brianna Hildebrand), Will (Christian Convery), and Zoey (Finley Rose Slater) make a sudden escape on one of the depot’s A.T.V.s, but not before Brynn swipes the keys to the depot’s truck and covers the entire driveway in oil so Jake (John Cena), Mark (Keegan-Michael Key), Rodrigo (John Leguizamo), and Axe (Tyler Mane) can’t pursue them. Jake ends up having to give chase on a little girl’s bicycle he takes from the garbage pile, and he manages to catch up to the kids and force them to stop, though the A.T.V. ends up rolling into a lake. When Jake asks Brynn why they would run when their parents are coming to get them, Brynn soon reveals that they are orphans; their parents died two years ago, and she was the one sending him the texts purportedly from their parents. She and her siblings were placed in Child Protective Services (C.P.S.) after their deaths, but a month ago, she discovered that C.P.S. was planning to separate them, so they went on the run. They fled the depot because she knew Jake would find out that they were runaway orphans and call C.P.S. on them. The group camp in the forest overnight, and Jake chats with Brynn privately and advises her against continuing to run because it is causing her to miss out on being a kid. After Brynn informs him that Zoey’s birthday is on Sunday and she doesn’t want her to remember her birthday as the day they all got split up, Jake promises to call C.P.S. and tell them to come to the depot on Monday.

The next day, Jake telephones C.P.S. and makes his request, and later, the environmentalist doctor Amy (Judy Greer) stops by the depot. She displays her obvious attraction to Jake, and though he is attracted to her as well, he does not capitalize on it. After she goes, the kids and the other smokejumpers – who can plainly see the mutual attraction – persuade Jake to take steps towards dropping his beliefs of never developing attachments or distractions in his line of work by asking Amy out to dinner. He does so via text with their help, and Amy accepts, having the meal with him at the depot that night. While putting the kids to sleep later on, Jake tells Will through a bedtime story of his belief that his father died on the job because he was distracted by having a family, and he swore that he would never let anything (like attachments and distractions) get in the way of achieving everything that his father had sacrificed for him. He then talks to Brynn, who encourages him to ask Amy to stay the night, especially since Zoey’s birthday is tomorrow and she and her siblings want her to be here. Shortly afterward, Mark, Rodrigo, and Axe suggest to Jake that they go into town and get a bunch of birthday presents for Zoey since they likely won’t see the kids again after Monday, and after Jake asks Judy to watch the kids while also inviting her to stay for the night, they head into town and get a bunch of gifts for Zoey, in addition to a few gifts for Brynn and Will.

The smokejumpers, the kids, and Amy have a big birthday bash the next day, and Jake shows Amy that he signed the contract she earlier gave him to no longer take water from Fisher Lake – a protected wildlife area containing endangered toads that she is studying – to fight fires with. However, Division Commander Richards (Dennis Haysbert) unexpectedly shows up to conduct a surprise inspection of the depot and voices his disappointment in the amount of code violations he already sees, putting Jake into a panic because he is on the shortlist to succeed Richards due to his impending retirement. A C.P.S. representative, Patty (Lynda Boyd), then appears, and Jake tells her that he told her to come tomorrow, but she replies that he can’t tell C.P.S. when they can or cannot come to collect orphaned children. After Zoey’s birthday cake is accidentally set ablaze moments later and Richards expresses disapproval over Jake’s conduct, Jake complains to all that this is what happens when you let your guard down. When Amy starts to object, he tells her that he can’t do his job right if he has distractions, and he feels he doesn’t have an identity beyond being a smokejumper. Amy then notices that the kids have vanished, and when she and the other adults look outside, they find that the kids have fled in Richards’ Humvee (Brynn having picked Richards’ pocket for the keys) and Brynn managed to slash the tires on all of the other vehicles before doing so. The smokejumpers go out in their helicopter to find them, with Richards coming along despite telling Jake that he is breaking every protocol in the book. Jake doesn’t care, though, for he is only concerned about the children’s safety.

While the youngsters are driving along, Zoey points out to Brynn that there is a rabbit in the road, and when Brynn swerves to avoid it, she careens off the road and through the woods before skidding to a stop on the edge of a cliff, with the driver’s side wheels just over the edge and the rest of the Humvee beginning to shimmy little by little after them. After Brynn tells Will and Zoey that her seatbelt has trapped her, Will takes out a laser flare that the smokejumpers gave him as a gift and shines it up into the sky to signal for help. The smokejumpers spot it moments later, and Jake parachutes out to help the kids. Will and Zoey get out of the Humvee through the front passenger window and run up to Jake when he lands, and after Will explains Brynn’s predicament, Jake gives him a knife to hand to Brynn to cut her seatbelt off with, and he ties one end of a line around himself and the other end around Will, leaving just enough extra line hanging off of the boy for him to tie around his sister’s waist. Will heads back up to the car, but he accidentally drops the knife on the floor while trying to give it to Brynn, so he climbs back inside to get it. He cuts his sister loose and ties the line around her, but before they can get out, the Humvee falls down the cliff. Thankfully, they get back on solid ground alive and unharmed, having managed to slip through the passenger window as the Humvee fell. Jake hugs them and Zoey and cries for the first time, and his team then lands and takes them all back to the depot.

Sometime later, the smokejumpers pack all the kids’ stuff into Patty’s van and say their goodbyes, but Will notices that Jake is not present. Richards goes inside and finds Jake sitting in his office and deep in thought. He brings up to Jake how he said that he feels he can’t do his job if he has any distractions, then proceeds to show Jake a picture of his own family on his phone and tells him that the people you care about, and who care about you, are not distractions, but the things that keep you going. He also lets Jake know that, after seeing what he did out there for the kids, there is no doubt that he is fit to be the next Division Commander. After Richards steps out, Jake looks up at a picture of his father, then he heads outside and tells the kids to get out of the van. He informs Patty that he will continue to watch over Brynn, Will, and Zoey under the Safe Haven Law until he can legally adopt them, then tells her to get the adoption process started. Jake gets a big kiss from Amy and they hug the children.

The next scene shows Brynn, Will, and Zoey living with Jake at his house as his foster children. Amy is there as well, and she and Jake are about to head to the local courthouse to get married. Mark, Rodrigo, and Axe then show up in the depot’s truck to pick them all up for the event. 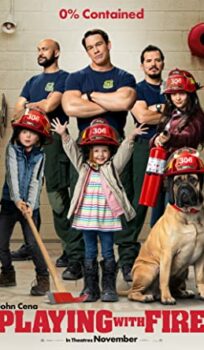