Nakoma, concerned about the clandestine meetings between her friend Pocahontas and the white man John Smith, tells warrior Kokumo (Pocahontas’s arranged fiance) where they are when she goes missing. He ambushes the lovers and is killed by John’s fellow settler Thomas. John is the one captured by the tribe, however, and is sentenced to death – with the settlers led by Gov. Radcliffe ready to kill all the Native Americans in retaliation (and because the gold they thought was on the land is non-existent).

Pocahontas realizes when she looks at John’s compass that this was the spinning arrow she saw in a vision – which signifies where her destiny lies. She bravely places herself between her father (and chief) Powhatan’s club and her lover, declaring that she has chosen the path of love, not hate. Powhatan realizes the error of his ways and declares they will not use violence to deal with their problems; the furious Radcliffe tries to shoot him but John takes the bullet. The other settlers turn on Radcliffe and have him forcibly returned to England to stand trial.

Though John will not die, he has to return to England as well to heal, so the lovers part, their lives forever altered by the time they had together. 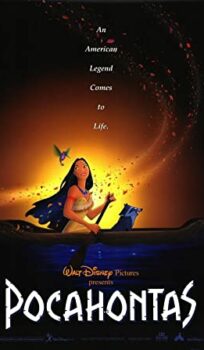