Apple Annie (Bette Davis) lives on skid row, and gets by selling apples.  She is like a mother to the homeless and the beggars.  Her daughter (Ann Margaret) is a wealthy high society dame in Europe. (They do not explain how mother and daughter are in such different circumstances.)  They have not seen each other in many years, but write constantly.  Annie has deceived her daughter into thinking that she is also wealthy and in high society.  The daughter is engaged to a count’s son.  A crisis hits, when the daughter writes that she is coming to visit with the count’s family. They want to check her family before the wedding.  Annie is desperate, as her daughter’s wedding will be called off when they find out she is a bag lady.

Underworld boss Dave the Dude (Glenn Ford) buys apples from Annie whenever he gambles.  He thinks her apples bring him luck.  His girlfriend, Queenie (Hope Lange) takes pity on the desperate Annie, and coerces the Dude into helping her.  For the week of the visit, they set her up in a penthouse apartment with a chauffeur, etc.  However, the count expects a society ball to announce the engagement.  They try to set up a ball, with all their hitmen and thugs pretending to be high society.

The mayor and governor are holding a summit to combat organized crime.  They drag in the Dude for questioning.  Without him there, the ball is doomed to fail.  After threats, bluffs and begging fail, the Dude tells them the truth about helping Annie.  Annie is about to reveal the truth to the count, when the governor and mayor enter.  They were so moved by what the Dude is doing, they show up at the ball to help him.  With the real high society there, it is a huge success.  The daughter and the count’s family all return to Europe for the wedding.

Note: While it is supposed to be a happy ending,  Annie will be going back to the streets, and will not attend her daughter’s wedding, or be part of her daughter’s life. 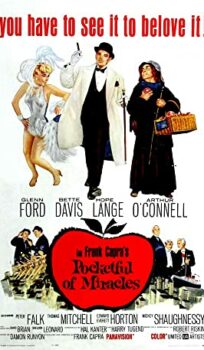