Pooper:
Johnny Utah tracks Bodhi to Australia and arrests him. Instead of taking him in, Johnny grants Bodhi’s last wish and releases him to surf the giant storm waves (where he dies). Johnny walks away after throwing his badge into the ocean.

Long Ending:
Johnny Utah (Keanu Reeves) is a recent graduate from Quantico and is a rookie agent for the Los Angeles FBI offices. Johnny was a Quarterback at Ohio State until a knee injury derailed his career. He is assigned to the bank robbery division and partnered with jaded cop Angelo Pappas (Gary Busey). They are investigating a string of robberies committed by a group called the Ex-Presidents, who rob banks while wearing rubber masks of former presidents Reagan, Johnson, Carter, and Nixon. The robbers are notable for never breaking into the vaults of the banks they rob, committing the crimes in 90 second, disappearing immediately afterwards, and never killing anyone.

Pappas has a theory that the group is composed of surfers because, amongst other reasons, the robberies only occur during the summer. With Johnny’s help, they convince their skeptical and ill-tempered boss Ben Harp (John C. McGinley) to let Johnny learn how to surf and go undercover. While learning to surg, Johnny meets a surfer-babe named Tyler (Lori Petty) who teaches him and introduces him to her ex-boyfriend, a surfer-philosopher named Bodhi (Patrick Swayze). Bodhi leads a group of surf-buddies, including Roach, Nathanial, and Grommet. Bodhi talks about his dream of flying to Australia the next year and surfing the massive waves that will be caused by a predicted 50-year storm.

Johnny begins bonding with Bodhi and his group and becomes proficient in surfing, even surviving a dangerous night-surf with Bodhi. He also begins dating Tyler and the two fall in love. Johnny ultimately implicates a group of violent surfers (cameo by Red Hot Chili Peppers’ Anthony Kiedis) as the Ex-Presidents. The FBI raids the house of the violent surfers and a bloody altercation ensues. They find a huge stash of drugs in the house, but no evidence that this group were the bank robbers. Worse yet, Harp chews out Johnny and Pappas because the surfers were under investigation by the DEA and the sting has blown the DEA’s operation.

Pappas and Johnny determine that, based on the group’s history, the Ex-Presidents will hit one more bank before the end of the summer. They conduct a stakeout outside a bank when it is robbed by the Ex-Presidents. Three of the robbers  make it to the getaway car before Pappas and Johnny intervene, and Johnny pursues the fourth robber on foot. Johnny injures his knee during the chase, but has a clean shot at the perpetrator. Realizing the robber is Bodhi, Johnny can’t bring himself to pull the trigger and allows Bodhi to escape. Pappas also loses the other three in the getaway car. Meanwhile, Tyler finds Johnny’s badge and breaks up with him for lying to her about his job and true identity.

The next day, Bodhi and his gang show up at Johnny’s house and force him into a van. Since Bodhi saw Johnny’s face during the chase, he knows that they are aware of his real job. They take him sky-diving and to Johnny’s relief, they properly packed his parachute. Upon landing, Bodhi tells Johnny he has abducted Tyler and that she is being held captive in a house in Mexico. Unless Bodhi gets to Mexico that day, his associates will kill her. He forces Johnny to join them on one last bank heist. Bodhi becomes unhinged during the robbery and orders the group to rob the vault. This delay allows time for an undercover cop and a security guard to open fire. Grommet, the police officer and a security guard are killed. Bodhi knocks Johnny out and flees with the other two and the money to the airport.

Johnny is arrested and chewed out by Harp. Upset with how his partner is being treated, Pappas punches Harp out and then takes Johnny to his car . Instead of arresting Johnny, Pappas releases Johnny from his cuffs and after being told the whole story, they drive to the airport and radio for assistance. Bodhi and Nathanial are loading guns and money into a plane when they are approached by Johnny.  Pappas hides and takes aim at them. Roach, who was in an office, walks out and spots Pappas and shoots at him. Nathanial and Pappas are killed in the ensuing gunfight and Roach is injured. Bodhi drags Roach and Johnny onto the plane before the other cops arrive and they fly to Mexico.

While flying over Mexico, Bodhi attaches a parachute to Roche and lets him jump out with the money. He has only one parachute left and puts it on himself, but refuses to call his contact to order Tyler’s release. Enraged, Johnny jumps out of the plane without a parachute and eventually catches up with and grabs on to Bodhi. Upon landing, they find Roach dead on the ground, having bled out from his wound. The pair fight and Bodhi gets the upper hand. After winning the fight, Bodhi calls his associates and orders Tyler’s release. He then meets another contact and drives away with the stolen money to freedom.

We jump ahead to find Johnny walking towards a beach in Australia. There is a raging storm and the other surfers say it is suicide for anyone to try and surf the waves. Johnny sees one man on the shore with a surfboard – Bodhi. Johnny explains he has been tracking Bodhi across the globe, missing him at each stop, until now. The two fight with Bodhi again winning. During the fight, however, Johnny cuffs Bodhi to him, thus preventing Bodhi from escaping. More FBI agents begin descending on the shore, prepared to take Bodhi into custody. Bodhi begs Johnny to let him fulfill his dream and ride the storm waves before his arrest, promising to return to custody after one wave. Both men know that going out in the storm is suicide, but Johnny uncuffs Bodhi and lets him paddle out to the sea.  We see Bodhi get crushed by a giant wave (thus dying) and Johnny throwing his badge into the ocean. 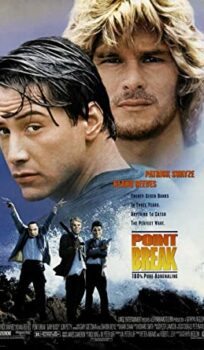