POOPER:
Capt. Harris suspends the C.O.P. program after a few of its members accidentally ruin an undercover police sting of a fencing racket. Later that day, a bunch of criminals escape their holding cells in the 19th precinct (which Harris runs) due to taking advantage of Lt. Proctor’s stupidity, and they lock up Harris, Proctor, and a visiting group of international police officials led by Commissioner Hurst before escaping.

C.O.P. member Lois witnesses the jailbreak and radios the cops. Cmdt. Lassard, Sgt. Mahoney, and their fellow officers succeed in rounding them all up at various locations around town and free the locked-up policemen, with the highlight of their heroic efforts being when they arrest the last four criminals at an air show after a high speed air chase. In the midst of the air show arrests, some C.O.P. members save Harris and Proctor from going over a waterfall.

When the dust has settled, the police officials commend Lassard on his C.O.P. program, much to Harris’ annoyance.

LONG VERSION:
After some members of the C.O.P. accidentally ruin an undercover police sting of a fencing racket, Capt. Harris (G.W. Bailey) declares that the C.O.P. program is suspended pending a full investigation. Cmdt. Lassard (George Gaynes) and Commissioner Hurst (George R. Robertson) then return from London with a group of police officials from the International Police Seminar to show off the C.O.P. program, but Harris informs Hurst in private about the program’s suspension.

As Harris is showing the police officials around the 19th precinct that he is in charge of, he sends Lt. Proctor (Lance Kinsey) into the holding cell area so Proctor’s idiocy won’t embarrass him in front of the officials. However, Proctor is tricked by the criminals in the cells – led by Zack (Randall “Tex” Cobb) – into getting close to one of them, and they seize him, take his keys, and get themselves free. When Harris, Hurst, and the officials come in a short time later, the criminals lock them all in the cells along with Proctor and then make their escape.

Now-ex C.O.P. member Lois (Billie Bird) witnesses them escaping, and radios the cops about the jailbreak. Lassard and some of his officers proceed to nab all but four of the criminals at various locations around town, and then they come to the precinct and free Hurst, Harris, Proctor, and the officials. Lassard tells them to thank Lois for everything.

Sgt. Mahoney (Steve Guttenberg) – who has the reporter Claire (Sharon Stone) along with him – then radios in that he is in pursuit of a stolen police car driven by the four remaining criminals, which is heading towards an air show. Once the criminals crash their car there, they decide to attempt an escape by air, so two of them steal a biplane and the other two steal a hot air balloon. Mahoney and Claire get into a biplane themselves and continue the pursuit. Harris and Proctor show up and go after the hot air balloon in their own balloon, and Sgt. Tackleberry (David Graf), Zed (Bobcat Goldthwait), Sweetchuck (Tim Kazurinsky), and Lois also show up, and the former three follow Mahoney in a biplane of their own. Proctor ends up accidentally firing a warning shot at the crooks into his own balloon, sending it down into a river leading to a huge waterfall. Thankfully, he and Harris are saved from going over the falls by the C.O.P.s Butterworth (Derek MacGrath), House (Tab Thacker), Arnie (Brian Backer), and Kyle (David Spade).

When the dust has settled, Nogata (Brian Tochi) tells Lassard – much to Harris’ annoyance – that the police officials feel that his C.O.P. program does many wonderful and crazy things. When Lassard asks for Mahoney to come and take a bow, Mahoney comes by in a hot air balloon bearing the police academy’s logo, with Claire along with him, and they toast to the police academy as they fly past. 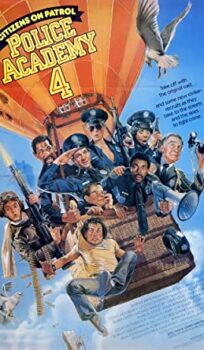