POOPER:
Lt. Harris kicks Hightower out of the academy after he overturns a police car with Copeland in it due to Copeland hurling a racial slur at Hooks. Later on in the cafeteria, Copeland and Blankes challenge Mahoney to a fight, and the timid Barbara comes to Mahoney’s defense and attacks first, leading to a big brawl. To prevent Barbara from being expelled, Mahoney tells Harris that he started the fight, so Harris – gleefully – expels him instead.

Later that day, a full-scale riot (unintentionally started by Fackler) breaks out downtown. All of the cadets are ordered to the scene, and Mahoney – who was getting ready to leave – decides to sneak onto one of the buses taking them there. Though Harris tells the cadets that they are just going to be in a peripheral safe area to divert traffic from the riot zone and protect public property, Cmdt. Lassard’s lack of knowledge of the streets in the area causes him to send them all into the riot zone. Amidst the ensuing chaos, a wanted criminal takes Harris hostage, but through the actions of Mahoney and a surprise assist from Hightower, he is rescued, and Hooks arrests the criminal.

LONG VERSION:
During the driving test, Hooks (Marion Ramsey) accidentally runs over Copeland’s (Scott Thomson) feet as she is finishing. He hurls a racial slur at her, which angers Hightower (Bubba Smith) and causes him to chase Copeland into the test car and then use his immense strength to flip it over onto its roof. Lt. Harris (G.W. Bailey) kicks him out of the academy right on the spot.

Later, Copeland and Blankes (Brant von Hoffman) confront Mahoney (Steve Guttenberg) in the cafeteria over how he apparently had wrecked the former’s car (which Hightower actually did when Mahoney was teaching him how to drive so he could pass the driving test), and Blankes challenges him to a fight then and there. The timid Barbara (Donovan Scott) comes to Mahoney’s defense by whacking Copeland in the face with his lunch tray, knocking him out. Blankes in turn knocks him out and then brawls with Mahoney. Blankes and Mahoney are brought before Harris, and when he asks who threw the first punch, Mahoney covers for Barbara by saying that he did, which finally gives a gleeful Harris the excuse he needs to expel Mahoney.

As Fackler (Bruce Mahler) is out downtown with an officer doing some job shadowing, he unintentionally sets off a chain of events that culminates into a full-scale riot by the time he returns to the academy. When word of the riot reaches police headquarters, all of the cadets are ordered to report to the dormitory parking lot in full riot gear, forcing them into action for the first time. Mahoney, who had been getting ready to leave, decides to don his riot gear as well and sneaks onto one of the buses taking the cadets downtown.

Though Harris tells the cadets en route that they will just be in a peripheral safe area so they can divert traffic away from the riot zone and protect public property, Cmdt. Lassard’s (George Gaynes) lack of knowledge about the streets in the area causes him to accidentally send all of the cadets into the riot zone, and chaos ensues for them all. Lassard comes down a short time later on a personal inspection and gets caught up in the riot as well, and Hightower – working at his old florist job – sees what’s going on outside and enters the fray.

Copeland and Blankes eventually cross paths with a wanted criminal (Doug Lennox), who steals their revolvers. The criminal eventually runs into and captures Harris and holds him hostage up on a rooftop, and he starts shooting at Thompson (Kim Cattrall), Hooks, Fackler, and Sgt. Callahan (Leslie Easterbrook) when they randomly show up below. Lassard, Mahoney, Jones (Michael Winslow) and Martín (Andrew Rubin) then appear on the scene, and after checking out the situation, Mahoney decides to enter the building from behind to try to execute a surprise attack on the criminal and save Harris. However, he fails, and he ends up being taken hostage as well.

Before the criminal can shoot them, Hightower appears. He tells the criminal that he wants to watch him kill Mahoney and Harris, and the criminal allows him to come close to see him do it. Hightower soon surprises the criminal with a hard punch, knocking him through the rooftop door and down the stairway. Shortly after he reaches the bottom, Hooks shows up and arrests him. 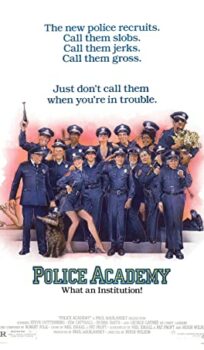