POOPER: (Thanks Curt)
The subdivision is built on an Indian burial ground. The developer never moved the graves, just the headstones.

The Freeling family lives in a newly built suburban home. The dad, Steve (Craig T. Nelson), works for the developer as their star salesman. He lives with his wife Diane (JoBeth Williams), teenage daughter Dana (Dominique Dunne), young son Robbie (Oliver Robins), and youngest child Carol Anne (Heather O’Rourke). They have a happy life and enjoy Steve’s financial success. However, Carol Anne talks to ghostly voices she hears through the static of their TV.

One night Carol Anne witnesses spirits emerge from the television set. Soon thereafter, the Freelings begin witnessing paranormal phenomena such as chairs moving by themselves and the house shaking. The haunting at first seems innocuous, and Diane is even entertained by some of the phenomena. However, things quickly turn sinister. A tree in their yard is possessed, breaks through the house window, and drags Robbie out. While the family is outside trying to save Robbie, a portal opens in Carol Anne’s closet and sucks her in. The family can hear her through the TV, but the girl herself is lost in the spiritual plane.

The Freelings call in paranormal investigators, who are amazed at the amount of phenomena going on at the house. Although some of the supernatural occurrences are awe-inspiring, much of it is hostile and the work of a violent poltergeist. One investigator is bitten by an unseen spirit and later has a hallucination of his face being melted off. The investigators eventually call in noted medium Tangina (Zelda Rubenstein) to assist.

Meanwhile, worried at how much work he’s been missing, Steve’s boss takes Steve out to a new site they plan to develop and to promote him. Steve learns that the new development will be placed over a cemetery. The boss assures Steve that they relocate the remains before development and, in fact, built the house where the Freelings live over a former cemetery.

That night, Tangina is able to open a portal to the spirit world. Diane enters the portal to find Carol Anne, while the investigators, Steve, and Tangina are attacked by the Beast – the malevolent poltergeist spirit that took Carol Anne. The group is successful in rescuing Carol Anne and then closing the portal. Tangina says the house is “clean” and that the day is saved. Nonetheless, the Freelings plan to move out.

Steve goes to quit his job while Diane stays at home with the kids and finishes packing. That night, Robbie is attacked by a possessed toy clown while a spirit assaults Diane. Another portal, this time massive and filled with teeth, attempts to drag both Robbie and Caol Anne into it. Diane and Steve (who returned home along with his boss) manage to rescue the kids and flee the house. As they flee, caskets and corpses begin bursting out of the ground. Steve deduces that to save money, the developer didn’t actually remove the remains but only moved the headstones. Thus, the angry spirits of the dead (influenced by the Beast) have been rebelling. The Freelings drive off as the entire neighborhood begins crumbling and exploding, and their own home implodes into the spirit world (leaving Steve’s boss completely horrified). The Freelings, now safe, spend the night in a hotel (but only after they remove the TV set out of the hotel room). 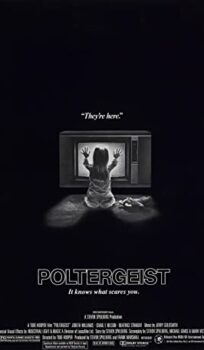