Four murderers (including Vic Morrow and Lee Van Cleef) escape from jail, rob the bank, and take a young lady hostage while making a run for it.  The sheriff gets shot. Before he dies, the sheriff names young gunslinger Banner Cole (Audie Murphy) as his deputy.  As the only law in town, Murphy goes after them.  Murphy wants to go alone, but is forced to allow a posse to accompany him.

Murphy kills 3 of the bad guys, and the hostage girl shoots one.  All four thugs, had raped the girl.  The girl wants to kill herself, because she thinks that no man will ever love her.  Murphy helps her see that she was a victim and no one will blame her.  Murphy and the girl fall in love.

Of the men in the posse:

Several others die along the way.

Besides Murphy, only Seymour Kern makes it to the end. 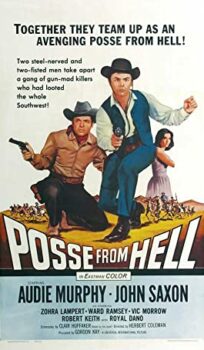