POOPER:
Jessie kills Sheriff Bates and his deputies for killing his father. He also kills Colonel Graham. Jessie, Obobo, and Weezie are the only surviving members of the posse.

LONG VERSION
Jessie Lee (Mario Van Peeples) is the head of the Buffalo Soldiers fighting the Spanish-American War in Cuba. He and some of his men are sent on a mission by his racist commanding officer Colonel Graham (Billy Zane) to capture a cache of Spanish gold while wearing civilian clothing. After completing the mission, they are ambushed by Graham and the rest of the cavalry. Graham intends to kill Jessie and his men by claiming that they were deserting and steal the gold for himself. Graham’s aide Weezie (Charles Lane) distracts the cavalry while Jessie and his men fight back, killing many of the cavalry and wounding Graham. Jessie and the surviving members of his group, Obobo (Tiny Lister), Angel (Tone Loc) and Little J (Stephen Baldwin), along with Weezie, escape Cuba with the gold and head to New Orleans. Once in New Orleans, Little J meets up with fellow gambler Father Time (Big Daddy Kane), who is fleeing other gamblers after he is caught cheating. While fighting the gamblers, Colonel Graham and his surviving members show up and join the gunfight, killing the gamblers and Angel in the process. They are able to escape and join up with Jessie, who had left the group behind to take care of unfinished business in the west. During this time, a reward is placed on Jessie and his men. Also, Graham and his men are in pursuit.

While riding out west, Jessie stops at a blacksmith to have gold bullets made out of the Spanish gold they still possess, then he kills the blacksmith by shooting him with one of the gold bullets. It turns out Jessie is on his way to kill the men responsible for murdering his father by shooting them with gold bullets, and the blacksmith was one of them. Jessie and his “posse” arrive in the town of Freemanville, which is a town of freed black slaves and their children, that was founded by his father. Jessie’s childhood friend Carver (Blair Underwood) is the town’s sheriff, but his deputy is a spy for Sheriff Bates (Richard Jordan) of the neighboring all-white town of Cutterstown. Through flashbacks, we learn that Bates and his deputies were the ones who murdered Jessie’s father. Bates and his men ride to Freemanville to arrest Jessie, but he is with his old girlfriend Lana (Salli Richardson), and they are rekindling their romance. Bates arrests Obobo and tries to get Weezie also, but Little J fights the group to protect him and gets killed. However, Carver wouldn’t fight Bates nor his men, even though he was within his rights to do so.

Jessie and Father Time go to Cutterstown and break out Obobo, and Jessie kills Bates’ top deputy with a gold bullet. At this time, Jessie figures out that Bates wants to get rid of Freemanville so he can claim the property and sell it to the railroad about to come through the area. Back in Freemanville, Jessie convinces the townspeople to fight Bates and his men once they return, but Carver warns them that they would be killed. Later, Bates and his men return to Freemanville, and they are joined by Graham and his men. The posse and the townspeople begin a huge gunfight, while Carver goes to empty out the safe in his office. The safe has all of the town’s deeds, which are all in his name. Confronted by Lana, Carver admits he and Bates were working together and they intended to split the proceeds for selling the town to the railroad, and that’s why we wouldn’t fight Bates. Bates, hearing his plan being revealed, kills Carver and takes Lana. Later, Jessie finally confronts Bates, and he kills the sheriff with his last gold bullet. With the gunfight over, all of Bates and most of Graham’s men were killed, but so was Father Time.

Just after Jessie kills Bates, Colonel Graham tells him that he has Lana and he wants his gold. Jessie goes to the saloon, which is on fire, and tells Graham he can have the gold if he lets Lana go. Graham refuses, as he intends to kill Jessie and Lana and take the gold, and also take the deeds and sell the town himself. Obobo sneaks in and tries to kill Graham, but is shot by one of Graham’s men. That distraction allows Jessie to shoot the last of Graham’s men and then kill Graham with his own sword that he carried throughout the movie. Jessie then rescues Lana and they, along with a wounded Obobo, escape the burning saloon just before it explodes. With Weezie and the surviving townspeople fighting the fire, Jessie gives a young boy he earlier befriended a book that his father had given to him many years earlier.

The movie ends in the present day, where an old man is being interviewed about black cowboys in the Old West. The man was the young boy, and he gives the young black reporter the book that Jessie gave him. Title cards at the very end say that nearly 8000 Old West cowboys, or about 1 in every 3, were black, and their stories have been ignored or forgotten because Hollywood refuses to tell those stories, until now. 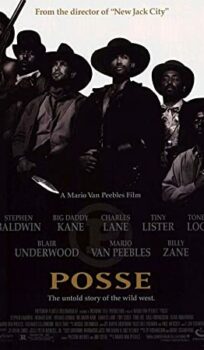