Pooper:
Tas works for a company whereby her consciousness is implanted in other peoples’ bodies in order to carry out assassinations. She loses control on one assignment and the host consciousness, Colin, attacks and murders Tas’ family (although it is unclear if Tas – who is implied to be a sociopath – was in control during the actual murders). Tas’ boss (possessing Tas’ son before he is murdered) then kills Colin, allowing them to extract Tas’ consciousness from Colin’s body. But the film ends ambiguously as to the state of Tas’ psyche.

Long Ending:
Tasya “Tas” Vos (Andrea Riseborough) works for a company whereby her consciousness is implanted in other peoples’ bodies in order to carry out assassinations. On recent assignments, Tas has opted to kill the marks in increasingly gory ways instead of shooting them discreetly. Tas also seems unable to have the possessed body commit suicide (the host body must die to both give cover for the assassination and for Tas’ consciousness to be returned to her body). But Tas hides this fact from her superior.

Tas indicates traits of a sociopath, such as practicing her future interactions with her husband Michael and son Ira. Indeed, she is very placid during sex until she imagines the brutality of her assassinations.

Tas’ boss Girder (Jennifer Jason Leigh) calls Tas in for a big job. They were hired to assassinate John Parse (Sean Bean) and his daughter Ava (Tuppence Middleton). They were hired by John’s stepson, who wants to take over the company. Tas will possess Ava’s fiancee, Colin Tate (Christopher Abbott), to carry out the murders.

The plan is enacted and Colin brutally beats John with a fire poker and painfully shoots Ava (later news reports say John survived the beating but is brain damaged). However, Tas cannot get Colin to kill himself. After a psychic struggle, Colin seemingly gains control of his body (it is unclear throughout the film whether Colin or Tas is in control of Colin’s body at any given moment). After several other people are killed by Colin as he seeks help, Colin learns about Tas’ family and heads to her home.

Colin breaks in and takes Michael hostage. The situation forces Colin and Tas to converse on the psychic plane. Tas claims she hasn’t been in charge of Colin for some time (implying Colin actually perpetrated some of the earlier murders) and encourages Colin to kill Michael. A skirmish ensues and Michael is killed by Colin (unclear who is in control of the body). Ira then fatally stabs Colin in the throat. Colin shoots Ira dead before he passes away (although Tas is implied to have been in control when this happens).

At the company’s headquarters, both Tas and Girder are removed from the possession machines (Girder having possessed Ira when Ira stabbed Colin). Psychological exams conducted on Tas are inconclusive as to her mental state (or even whether Colin’s consciousness may be in Tas’ body). 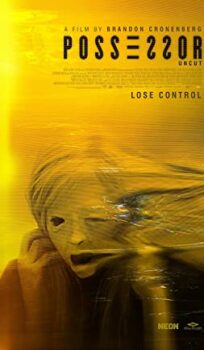