SHORT VERSION:
One day, Gary Lee assigns Griffin to work with Bango in the Mist kitchen the following morning, located in a trailer in a Rollerboys-owned naval yard, and Griffin calls Casey to let her know about it. Instead, he gets Watt and Tyler on the phone, so he tells them about his kitchen shift and also tells them to tell Lt. Jaworsky to come to the location at noon.

While working in the kitchen, Griffin spots a bag of brown powder with a toxic pictogram on it and asks Bango what it is, and Bango informs him that it is the very “Rope” referenced in the gang’s mantra “the day of the Rope is coming”. He explains that Rope is added to every batch of Mist made, and this chemical causes those who use the drug repeatedly to become sterile, which is the cornerstone of their plan to wipe out people they deem weak and inferior.

At noon, Watt and Tyler attack the trailer and kill Bango once they break into it, but then tell Griffin that they are going to kill him, too, since they plan to make off with the money in the trailer. Thankfully, Casey appears and blows them away, with Jaworsky and some other cops following in behind her. A short time later, Griffin, Casey, Jaworsky, and the other police officers get confronted by Gary Lee holding Miltie hostage and backed by a big squad of Rollerboys, but Miltie soon gets free and the cops and Rollerboys get into a shootout while Gary Lee chases Griffin through the warehouses. Griffin eventually gets the better of him, but despite Gary warning him that he had better kill him, Griffin just knocks him out and delivers him to the police.

Griffin, Miltie, Casey, and the former two’s mentor Speedbagger leave Los Angeles for Oregon to hide from Gary Lee, but Gary Lee figures out where they are going and starts planning to get revenge on them in the near future.

LONG VERSION:
One day, Griffin (Corey Haim) joins Gary Lee (Christopher Collet) and a bunch of Rollerboys in beating up a defenseless man who has his head wrapped up in a cloth (as a way of showing his loyalty to the gang after having doubt cast over it by Gary Lee), but when they remove the cloth, Griffin discovers that the man is his black friend and father figure Speedbagger (Julius Harris). Bullwinkle (Morgan Weisser) – a Rollerboy that Griffin is mutually hostile with – reveals to Griffin that he had brought Speedbagger here (after having seen Griffin leave his home earlier that day and knowing of their close relationship), and Griffin angrily warns him that he will kill him if he touches Speedbagger again. He then gets into a brief scuffle with Bullwinkle before Gary Lee separates them. Gary Lee, Bullwinkle, and the others soon take off and leave Griffin with Speedbagger, and Miltie (Devin Clark) – who was hiding nearby and saw the whole assault – comes out and berates Griffin for letting this happen to their friend.

They get Speedbagger to the hospital, and as they are watching over him, he regains consciousness and tells Griffin that he and Miltie need to get out of Los Angeles. Miltie then fearfully says to Griffin that the Rollerboys will find them and wonders where they are going to go to get away from them since the options they have aren’t promising, and Griffin tells him to just go back to their motorhome and he will meet him there later. That night, Griffin goes to Casey’s (Patricia Arquette) apartment and tells her that he and Miltie are leaving town because they have become too deeply involved in the Rollerboys’ activities, and Casey expresses discouragement over her efforts to shut down the gang (she wants revenge on them because her brother had fallen under their sway and died fighting for them). Griffin asks her to come with them, but Casey replies that she is not leaving until she finishes this. Griffin gets up to go home, but Casey stops him and kisses him, and they wind up having sex and he stays for the night.

However, Bullwinkle shows up at Casey’s door the next morning. He first chides Griffin for defending Speedbagger, and then moments later, he finds Casey’s police badge on a nearby table. Furious at this discovery, he draws his gun to shoot both Griffin and Casey, but before he can, Casey’s fellow cop Watt (G. Smokey Campbell) barges in and aims his gun at him. Bullwinkle holds Casey hostage in response, and he strangely tells Watt that he recognizes him. However, before he can say what exactly he recognizes Watt as, Watt’s partner Tyler (Jake Dengel) sneaks up behind him and puts a bullet through his brain. Later, several other police officers come and take Bullwinkle’s body away, and an arriving Lt. Jaworsky (J.C. Quinn) tells them to dump him somewhere in the Avenues so the Rollerboys will think that the B-13 gang took him out. He also asks Watt and Tyler what Bullwinkle was talking about before they iced him, but they just lazily dismiss his question and Jaworsky lets them go on their way. Jaworsky implores Griffin to reconsider fleeing because he is close to something major, but Griffin turns him down, saying that he and Miltie will just take their chances. He asks Casey if she is coming, but she just turns her eyes away from him, and Griffin heads out the door.

When Griffin returns to the motorhome, he finds Miltie completely wasted on Mist. Later, Gary Lee stops by with Bango (Mark Pellegrino), one of his top henchmen, and asks Griffin questions regarding the circumstances surrounding Bullwinkle’s death, but he denies knowing anything about it. Gary Lee tells him that, tomorrow morning, he wants him to work Bullwinkle’s shift in their Mist kitchen (located in a reinforced trailer in a warehouse in a Rollerboys-owned naval yard), and Griffin agrees to. Sometime after Gary Lee and Bango have left, Griffin telephones Casey to give her the lowdown on what is in store for him tomorrow (she had been wanting him to work the Mist kitchen so he could keep all of the evidence in it from getting destroyed). However, Watt and Tyler answer the phone instead, so he tells them about his kitchen shift and says that they need to tell Jaworsky to come to the trailer at noon.

The following morning, Griffin meets Gary Lee and Bango outside the trailer, and Gary Lee assigns Bango to coach Griffin through the Mist-making process. A short time later, Griffin spots a bag of brown powder in the kitchen with a toxic pictogram on it and asks Bango what it is, and Bango replies that it is the very “Rope” mentioned in the gang’s mantra “The day of the Rope is coming”. He then explains what it is for and how it ties into why the Rollerboys are forbidden to use Mist: Ever since the gang started to manufacture the drug, they have added Rope to every batch of it, and this toxic chemical causes those who repeatedly use Mist to become infertile. Therefore, in time, those whom the Rollerboys deem weak and inferior (such as any non-Caucasian race) will be wiped out. When Griffin asks him about Miltie, he replies that he should be alright because he has only used Mist a couple of times.

As the noon hour approaches, Watt and Tyler sneak onto the property and silently take out multiple patrolling guards as they make their way to the trailer. When they do loudly announce their presence outside of it, Griffin turns on Bango and gets into a fight with him, but just as Bango gets the advantage and is about to kill Griffin, Watt and Tyler break in and shoot him dead. However, Watt points his gun at Griffin and says that he isn’t getting out of this alive, prompting him to realize that the destruction of the other Mist house that Bullwinkle was caught up in earlier in the film was really caused by Watt and Tyler clad in B-13 gear and not the B-13 gang itself (and they took the drug money from that place and plan to do the same here, but this time makes sure that there are no witnesses). Thankfully, Casey shows up in the nick of time and blows away both of the crooked cops, and Jaworsky and a bunch of other officers then enter and bag up the bodies.

As Griffin, Casey, and the policemen are walking away from the trailer, Gary Lee suddenly appears, flanked by a bunch of armed Rollerboys and with Miltie in his grasp. After Jaworsky tells his subordinates to fan out, Gary Lee expresses his disappointment to Griffin about his betrayal, then tells him that he wants the drugs in the trailer or else Miltie gets it, though Jaworsky firmly states that there will be no deals. When Miltie insults Gary Lee while pleading with Griffin to help him, Gary Lee has him face him and orders him to shut up, giving him the opportunity to get away from Gary Lee by biting his ear. Griffin then takes down Gary Lee before rollerblading away, and Miltie takes cover behind a police car while both the cops and the Rollerboys start shooting each other.

Gary Lee goes after Griffin, and they have a chase through a couple of warehouses that mostly sees Griffin avoiding Gary’s gunshots. Gary Lee manages to lock Griffin in one warehouse with him, but Griffin turns the tables on him by knocking him down and causing his gun to fall out of his hand, after which Miltie – who followed them inside – appears and gets the gun to his brother. Griffin points it at Gary Lee, and Gary Lee warns him that he had better kill him. Griffin won’t do it, however, telling Gary Lee that he is not like him, and he ends up kayoing him by striking him across the face with the gun. Griffin and Miltie take Gary Lee back to the cops as they are arresting all of the Rollerboys that didn’t get killed in the shootout, and Jaworsky puts Gary Lee in the back of a cop car, but not before he mocks Griffin for not taking him out when he had the chance.

Griffin, Casey, Miltie, and a fully recovered Speedbagger leave Los Angeles for Oregon in order to hide from Gary Lee. However, when we next see Gary Lee conversing with his lawyer in his cell, he tells the lawyer that he is increasing the Rollerboys’ investments in the Pacific Northwest because he knows that that is where Griffin is heading to, obviously planning to get revenge on him in the not-too-distant future. 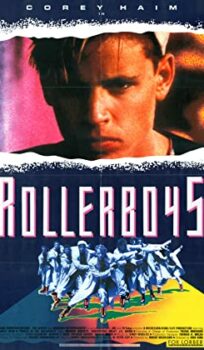