After the Predator (Kevin Peter Hall) kills Harrigan’s (Danny Glover) partner Lambert (Bill Paxton) and gets the pregnant Cantrell (Maria Conchita Alonso) sent to the hospital, Harrigan tries to pursue it, but is captured by the Black Ops and brought before Agent Keyes (Gary Busey). Keyes finally reveals to Harrigan his agenda: He and his men had been pursuing the Predator ever since the events of the previous film, and have been tracking it all over Los Angeles in the hope of capturing and studying it, particularly because of the advanced technology it possessed. He and the Black Ops were going to make their move at a nearby meat plant soon, since the Predator stopped in there every 2 days to eat, and attempt to capture him by freezing him solid with liquid nitrogren.

However, despite their best plans to get around the Predator’s infrared sight, they don’t realize until it is too late that the Predator can see in more than just infrared. It switches to a sight that tracks them by their UV and tactical lights and proceeds to slaughter all except Keyes. Harrigan gets away from the other soldiers, arms himself, and blasts his way into the meat plant. He confronts the Predator, shooting it several times and unmasking it, but the Predator revives himself, finishes off Keyes, and goes after Harrigan.

They hunt each other through the meat plant into an apartment building, Harrigan acquiring one of its smartdiscs along the way. He eventually chases the Predator into the apartment’s elevator shaft, and falls down it into a hole in the bottom, landing on the Predator’s spaceship. Harrigan enters the ship, warily searching for the Predator while observing his surroundings. After coming across his trophy case, the Predator attacks again, and the fight resumes. Harrigan eventually kills the Predator by gutting him with the smartdisc.

After checking to make sure the Predator was dead, an Elder Predator and eight others become visible around him. Harrigan thinks he is doomed to die, but the eight Predators take their fallen comrade away, and the Elder Predator gives Harrigan, as a trophy for killing one of their own, a flintlock pistol that belonged to the famed Barbary pirate Raphael Adolini, dated 1715. This indicated that the Predators have been visiting Earth and hunting humans for sport for a long time. The Elder Predator leaves, and the ship starts up its engines. Harrigan exits the ship before it takes off for parts unknown.

Harrigan comes outside of the ship’s hiding place, covered in ash, and is met by Keyes’ assistant Garber (Adam Baldwin). “Goddamn it, we came so close!’ Garber tells him. As Garber walks back to the chopper he came out of and Harrigan walks towards the arriving police cars, Harrigan says, ‘Don’t worry, asshole. You’ll get another chance.” 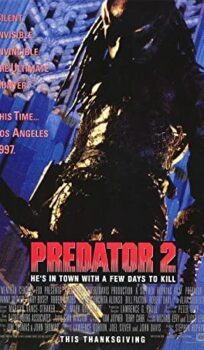