One day, Sarno (Stephen Lee) tracks down Vicki (Colleen Morris) to Frank’s (Brett Cullen) farm since he believes she stole his cooler that contained the dinosaur eggs, and thinking that she is hiding them there, he decides to take them back by force. He sneaks onto the house’s porch and ambushes Frank with a handgun before demanding that he fork over the creatures. Having overheard this, Jerry (Austin O’Brien) has Elvis the Tyrannosaurus bite Sarno in the ankle, giving Frank the chance to take Sarno’s gun away from him and scare him off his property by firing some shots into the air. However, Sarno warns that he will be back.

Later that day, Sarno returns to the farm, but this time he has brought along two hired thugs, Louis (Tony Longo) and Ritchie (Stuart Fratkin), and a couple of cages. In the end, despite valiant resistance from Frank and the others, the villains manage to kidnap all the dinosaurs except for Madonna the Pterosaur, who flies away. Sarno also forces Vicki and the family dog Ruby to come with him, the former because she knows how to properly care for the dinosaurs and the latter because they think she is their mother. Before leaving, Sarno orders Frank, Jerry, and Monica (Samantha Mills) to count to 500 to allow him and his thugs time to get away, and he warns that, if they follow him, he will kill Vicki. The next day, Sarno gets a story put in the town’s newspaper saying that he is having a big surprise exhibit at his museum today, which Frank reads about at home. Though he initially had accepted that Sarno got the best of him, seeing the article – in addition to prodding from Jerry and Monica to do something to help Vicki, Ruby, and the dinosaurs – spurs him to drive his kids and Madonna into town to save everyone.

Frank and the kids pull their truck up to the rear entrance of the museum’s gift shop, where they meet the janitor Whitey (Tom Williams) (who doesn’t like Sarno any more than they do). After Whitey tells Frank that Sarno is currently in front of the museum with Vicki holding a press conference to unveil the dinosaurs, Frank goes off to join the spectators and news crews assembled there. However, when Sarno has the curtain lifted on the cage supposedly containing the creatures, Ruby is found inside instead, thanks to Vicki and Whitey having earlier performed a switcheroo without Sarno’s knowledge. The crowd laughs at Sarno for his apparent hoax and leave, and Frank then comes up to Sarno and punches him in the face before hugging and kissing Vicki. Meanwhile, Whitey takes Jerry, Monica, and Madonna into a storage room, where the other dinosaurs are found safely stashed in a box there.

Soon after, Frank, Vicki, Jerry, and Monica put Ruby and the dinosaurs in the back of Frank’s truck, and they all drive back to the farm. 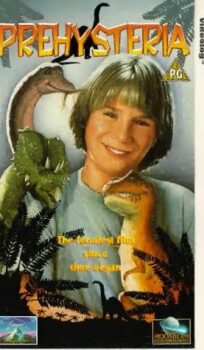