The envelope contains a ticket that can be redeemed for cash among the Chinese mob in NYC. Nima (Jamie Chung) needs to have it delivered by 7pm so her son can be smuggled out of China to her in New York. Wilee (Joseph Gordon-Levitt) and Vanessa (Dania Ramirez) team up to elude Bobby Monday (Michael Shannon)–a corrupt cop who is trying to steal the ticket to settle a gambling debt. They call in other bike messengers to ‘flash mob’ the delivery location and get passed Monday. During the melee, Monday is shot and killed by an agent from the organization Nima purchased the ticket from (they are displeased by his interference in their business).

With the ticket delivered, Nima gets a phone call that her son has been cleared to board a boat to New York, and Wilee and Vanessa kiss. 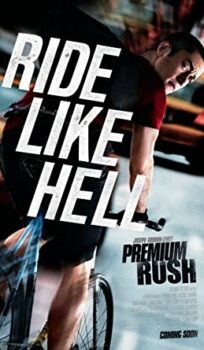