Edward (Richard Gere) and Vivian (Julia Roberts) both end up falling for each other during the week they spend together. When the week comes to an end and Edward has to return to New York, he tells Vivian that he wishes to see her again and offers to supply her with a car, a condo, and as much money as she needs, but Vivian refuses, wanting a commitment or nothing at all. She describes a fantasy from her childhood – her being rescued from a tower by a knight on a white horse – and tells him that she wants that fantasy. Edward tells her that he cannot give her that.

Edward chooses to not buy out Morse Industries, instead becoming partners with owner James Morse (Ralph Bellamy). Edward’s lawyer, Philip (Jason Alexander), angry about this decision, goes to Edward’s hotel room to confront him about it, but he finds Vivian there instead. He blames her for Edward backing out of the takeover and tries to force himself onto her, but Edward arrives, punches him, and kicks him out. After Vivian and Edward share some parting words, she leaves the hotel to go back home, but before she does she thanks the hotel manager Barney (Hector Elizondo) for the kindness he showed her during her stay there.

The next day, Edward checks out, and Barney notices his pensiveness over having let Vivian go. He tells him that the limo driver Darryl (R. Darrell Hunter) took Vivian back to her home, so Edward has him take him to her place in a white limousine, arriving just as she is about to leave for San Francisco to get a job and finish high school. Flowers in hand and opera music blaring from the limo, Edward climbs the fire escape of Vivian’s apartment and meets her on the landing, where he asks her what happens in the fantasy after the knight rescues her from the tower. She says that “she rescues him right back,” and they kiss warmly and presumably live happily ever after. 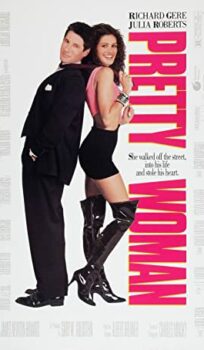