Tom Newman (Peter Weller), an architect, travels to South Africa with his new wife, Amy (Bridget Moynahan), his bratty teen daughter Jessica, and his youngest son, David, to give the kids a chance to get to know their stepmom. Jessica hates her and makes no secret of that fact.

While Tom is off at work, Amy and the kids take a jeep ride to the wilderness. David wants to go the bathroom, and the guide (stupidly) leads him away from the Range Rover to some bushes. They’re attacked by lions, David makes it back to the car, and the guide gets killed horribly.

They spend the remainder of the movie inside the vehicle with the lions outside. At one point, Amy spots the truck’s keys on the ground and makes a dash for them; she just barely makes it back. They take off, get lost, and end up driving the Rover into a ditch.

With the search for his family going nowhere, Tom hires a badass big game hunter to help him, and they set out. The hunter hates the idea and keeps reminding Tom that his family may be dead already out in the wilderness.

When they spot a helicopter, Jessica tries to get its attention and a lion shows up; it gets shot in the head by two African poachers (victims). Despite not speaking the same language, one of them leads Jess to a river for water. They hear a gunshot, quickly get back and the African takes off looking for his missing (and probably dead) partner.

During the night the poacher returns to the car. They let him in, but the lion bursts in through the window, drags him outside, and kills him. Amy and the kids barricade the windows using the seats.

In the morning, Tom and the hunter arrive and get attacked; they shoot one lion, but the other one kills the hunter. Tom hides under the car. Amy ruptures the gas tank, spreads gasoline over the inside of the truck, and tells Tom and the kids to make a run for a nearby tree. They do so, Amy uses her lighter, and blows up both the lion and the truck.

The family, now happily reunited (Amy and Jess patched up their differences during the ordeal, obviously) sets out back to civilization, while we hear growling coming from the bushes… 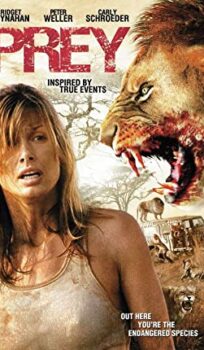