The movie opens prior to World War I, where a young Lou Gehrig dreams of becoming a professional baseball player. His overbearing mother, on the other hand, wants him to attend Columbia University, where she works as a chef, and to become an engineer like his uncle. Years later, Gehrig (Gary Cooper) is a student at Columbia and a star on the baseball team. His prowess on the baseball field is getting the attention of scouts and local sportswriters, but he continues to follow his mother’s dream by studying to be an engineer. After his mother falls ill and his father cannot pay the medical bills, Gehrig drops out of college and signs with the New York Yankees. Once his mother recovers and learns that Lou paid her medical bills with his baseball money, she is furious, claiming that no one can be successful as a baseball player.

After a brief stint in the minors, Gehrig is called up to the Yankees during the 1925 season. After sitting on the bench for several games, he replaces an injured Wally Pipp at first base. The next day, he becomes the Yankees’ starting first baseman. During that same season, Gehrig would meet and eventually fall in love with Eleanor Twichell (Teresa Wright). After they marry, Gehrig’s mother continues to smother her son; this time by convincing Eleanor that Lou would prefer her choices in furniture and wallpaper for their new home rather than the ones Eleanor picked out. Gehrig confronts his mother and tells her that Eleanor is the one who will be making the decisions in their household, not her. As the movie progresses, it’s obvious that Lou and Eleanor have a storybook romance.

As the seasons go by, the Yankees win countless championships, Gehrig wins numerous awards, and he would play in over 2000 consecutive games, earning the nickname “The Iron Horse”. But during spring training prior to the 1939 season, Gehrig begins to experience muscle weakness and fatigue. He starts the season in a slump, and when he is no longer able to grip a baseball bat, he takes himself out of the starting lineup, ending his streak of 2130 consecutive games. A trip to the doctor reveals that he has amyotrophic lateral sclerosis, or ALS, a disease that has no cure and will eventually kill him.

On July 4, 1939, the Yankees honor Gehrig on the day he will officially announce his retirement. The day concludes with Gehrig giving his famous “Luckiest Man” speech. Two years later, just 17 days before his 38th birthday, Lou Gehrig died of the disease that now bears his name. 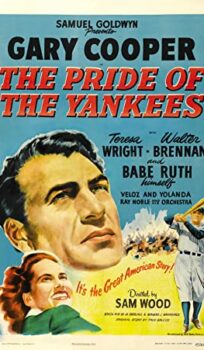