Submitted by Dr. Mat (Pooper) and Evan B (Longer)

Pooper:
Jack Stanton (John Travolta) eventually gains enough power and popularity to rule out every last one of the other Democrat pre-candidates, and goes on to win the elections and the Presidency.

The last shot of the film shows him and his wife Susan (Emma Thompson), now the First Lady, at the White House.

Young community activist Henry Burton (Adrian Lester) is invited to join the presidential primary campaign for Democratic governor Jack Stanton (John Travolta). He agrees to join after hearing Stanton give a heartfelt talk with a group of disenfranchised adults learning to read. He also comes to admire Jack’s wife Susan (Emma Thompson), who seems more savvy and educated than Jack. Between Jack’s folksy mannerisms and ability to connect with the lower class and Susan’s strategic brilliance, the pair seem primed to make a serious run at the presidential nomination.

After joining the campaign, Henry joins forces with strategists Richard (Billy Bob Thornton) and Daisy (Maura Tierney) and the campaign begins to really take off. But Henry witnesses various things that suggest the Stantons aren’t as noble and idealistic as they first seem. This includes (1) possibly using Henry for his race (African-American) and the fact that his grandpa was a famous civil rights leader; (2) Jack having various affairs, and Susan covering for him after they are revealed; (3) willingness to distort their opponent’s positions; and (4) covering up a criminal incident in Jack’s past. Mike rationalizes it by acknowledging that ultimately the Stantons will be best for the country. This leads to him breaking up with his activist girlfriend, who thinks the Stantons are actually merciless and dirty.

Susan hires a family friend named Libby Holden (Kathy Bates) to investigate both Jack (so they can get out in front of any scandal) and the women who accuse him of infidelity or other bad acts. Although Jack actually engaged in much of the infidelity and bad acts accused of, Libby also is able to uncover that his accusers are greatly exaggerating or even fabricating details to make Jack’s scandals seem worse than they are. With Libby’s help, the team is able to prevent any major scandals and discredit his accusers.

However, during a telephone call with Jack’s elderly opponent wherein Jack antagonizes him, the opponent has a stroke and drops out of the race. He is replaced by a governor named Fred Picker (Larry Hagman) who had been long retired. Picker begins surging in popularity due to his earnestness and good-nature. The Stantons fire (unfairly) Richard and Daisy to try and bolster their campaign’s effectiveness, but find it hard to weather a scandal in which an underage girl claims that Jack impregnated her. Henry truly begins losing faith when they use him (and specifically, his race) to convince the family of the underage girl to go into hiding and get an invasive paternity test (they are also African American). The Stantons then ask Libby and Henry to investigate Picker and dig up dirt on him. Libby objects as she says that digging up dirt on another candidate is unfair and dirty politics, but then acquiesces She explains to Henry that she only agreed to the request to see what the Stantons will do when she uncovers the dirt (and hopes they will do the right thing).

Libby and Henry discover that the reason Picker retired many years ago was because he had developed a cocaine habit and had a homosexual affair. Libby and Henry agree that this “scandal,” which happened decades ago, should not be leaked because it is irrelevant to his candidacy and will utterly destroy his life (he has been clean for decades and is a good father). But when they tell the Stantons, they immediately demand that the dirt be leaked. Libby pleads with them, telling the Stantons that when they were young, they promised to clean up politics and always do the right thing. The Stantons attribute such promises to their own youthful naivete and counter that if they don’t leak it, someone else eventually will. They also justify their decision by saying ruining Picker is better than letting a Republican win. Libby then tearfully blackmails the Stantons to not reveal it by saying she has proof that while Jack isn’t the father of the underage girl’s baby, he did sleep with her. This forces the Stantons to not use the evidence against Picker. Later that night, Libby commits suicide as the Stantons had let her down.

After Libby’s funeral, Jack meets with Picker and gives him the evidence of his past scandal. Picker realizes that if Jack found it, someone else will, and that it will ruin his life when they do. He decides to drop out of the race (although Picker and Jack also both agree that dropping out won’t really stop the press from unearthing the scandal, but it may make the media scrutiny less intense). With Picker out, Jack has a clear path to the nomination.

Henry then tenders his resignation, explaining he can no longer condone the Stantons’ behavior or work in a field as morally bankrupt as politics. Jack pleads with Henry to stay. He notes that while he did the morally right thing by not exposing Picker, it was the wrong thing politically. Jack says that despite his scandals and dirty tricks, his vision for the country is ultimately better than everyone else’s. He also argues that Henry would not be fulfilled in a more idealistic job and wants to be part of something historic like a successful presidential campaign.

The film jumps ahead to see that Jack won the nomination and the presidency. Jack goes to greet his fawning supporters…. including Henry. 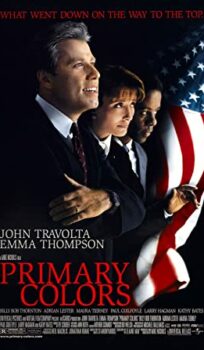