POOPER:
Grace and Clint get engaged, but not with the Princess Cut ring. The family doesn’t sell the farm.

LONG VERSION:
Grace Anderson (Ashley Bratcher) is a 20-something farm girl from North Carolina who has been waiting her whole life for Mr. Right to show up and place the Princess Cut diamond ring she has been desiring for a long time on her finger. She thinks the time has finally arrived when her long-time boyfriend Stewart says he’s coming into town from college to tell her something. However, he shows up with his new girlfriend and announces their engagement. She is understandably crushed by this and is now convinced that she will never find the right guy for her (this is the second time a boyfriend dumped her instead of proposing).

One day, Grace goes into the local coffee shop and meets their only male barista Jared (Cory Assink), who used to work at the jewelry shop where the Princess Cut ring is on display. He eventually gets her phone number and soon she begins to think he might be the one. Later, the family meets their new neighbor Dr. Clint Masters (Joseph Gray), who just recently graduated medical school, and he appears to be smitten with Grace. While all this is happening, Jim is being pestered by a local real estate agent into selling their property, since they are nearly in default on their loan. He kicks the agent off of the land, which has been in the family for over 100 years, but he thinks it might be time to sell.

Grace and Jared go on their first date, which soon turns into their second, then third, and so on. Grace’s mother Katherine (Mimi Sagadin) feels something is off about Jared, but she can’t put her finger on why she feels that way. It turns out he wants to take their relationship to the next level, but Grace is not comfortable doing that. She takes that frustration out on her brother Drew, and he gets injured as a result, but Clint is there to tend to his injury. A distraught Grace then goes to her mother and tells her she feels that way, and took it out on Drew, because Jared tried to take advantage of her and she ran off. Katherine and Jim tell her that in order to find the right guy, you have to plant seeds before you can get a harvest, just like what they have been doing on the farm. She understands what she needs to do, and the first thing she does is break up with Jared.

While Grace begins going through the Bible and self-help books, learning how to have a proper and Biblical relationship, Jim tells the family that if the next crop fails, he’ll have to sell the farm. Clint, still tending to Drew’s injury, begins to help the family on the farm. He also goes to Grace’s parents and asks their permission to court Grace, and they give their approval. Grace is hesitant to start another relationship so soon, but after Clint tells her that her parents already gave their approval, they begin a relationship. As time goes by, their relationship grows, but she still just considers him a friend. Soon, a woman shows up at the farm, and she tells Grace and the family that she and Clint are old friends. This woman, Brooke (Jenn Gotzon), seems to think that she and Clint are going to restart their relationship. Clint tells Jim that they were once engaged, but they mutually agreed to break it off. He even buried the engagement ring so he could forget about her. Clint tells Brooke that he is not interested in restarting their relationship, but she won’t take no for an answer and decides the only way to get him back is to make Grace lose interest in him.

Thanks to Clint’s help, the crop comes in, and it’s enough to save the farm. To celebrate, the family hosts a harvest festival and invites their neighbors. The festival is going great until Jared shows up. He meets Brooke, and together they conspire to break up Grace and Clint so they can get their respective former loves back. The plan backfires, and both of them are thrown off the property by Jim and Grace, but Clint also leaves. A week goes by, and Grace writes to Clint wondering if he’ll come back. He does, and he tells Grace that he went home to let Brooke know once and for all they are finished, and to get something he left behind. He tells her that he loves her and pops the question, and she says yes. He then gives her the ring that he buried. The movie ends sometime later, with Grace and Clint at his home, as they start their new life together. 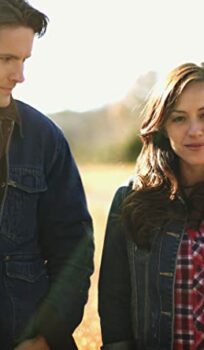