Submitted by "just me

Prince Ashitaka (voice Billy Crudup) , while defending his village, is bitten on the arm by an animal boar god from a forest to the west. The boar was driven mad by pain from an iron ball (bullet), and the madness made him become a demon. Ashitaka must travel far to the west to try and find a cure before the dark mark on his body spreads and he dies.

Ashitaka finds Iron Town ruled by Lady Eboshi (voice Minnie Driver) who has ordered the forest on the mountain to be cut down so she can mine the iron underneath. Iron Town is full of outcasts that Lady Eboshi treats well, and they love and respect her.

Princess Mononoke, also called San (voice: Clare Danes), lives in the mountain forest where she was raised by Moro (voice Gillian Anderson) the wolf-god of the forest. Ashitaka meets rescues her from certain death when she attacks Eboshi in IronTown. He is wounded but is cured by the Spirit of the Forest. The animal gods – Wolf, Boar, Monkey – believe that humans must be destroyed to save the Forest but Ashitaka believes the forest and humans can live together in peace. Lady Eboshi is tricked into going into the forest with Jigo (voice Billy Bob Thornton) who is trying to get the head of the Spirit of the Forest or Night-Walker for the Emperor, who believes it will grant immortality. While she is away the samurai attack Iron Town. When Eboshi shoots off the head of the Spirit of the Forest, the headless body spreads over the land killing everything it touches, including most of the samurai. Ashitaka warns the people of Iron Town so they are safe. San and Ashitaka retrieve the head, the Spirit of the Forest is restored, life returns to the forest and countryside, and Ashitaka’s demon wound is cured.

At the end, San will live in the forest with wolves, Ashitaka will help rebuild IronTown, and they will help humans and the forest live together in peace.

Thanks Joy Z… who adds the following commentary:
Amazing film, complex plot, interesting view of feudal Japan and spirit beliefs, fantastic animation, and complex characters who have multiple motivations for what they choose to do. 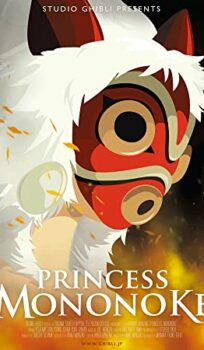