The Maestro (Hector Elizondo) ends up confronting Mrs. Rawlings (Dody Goodman) directly in her room and steals the diamond from her at gunpoint, and then he binds and gags her in the bathroom. As he is leaving the hotel with his wife, he crosses paths with Ben (Rob Morrow) again, and – still determined to make him pay for giving him a horrible haircut earlier in the film when he (unwillingly) posed as the hotel barber – he immediately chases after him.

After a few madcap comic moments that follow, the Maestro accidentally loses the diamond to Ben. The Maestro then runs into the security guard Reeves (Tony Azito), and he tells him that Ben stole the diamond from him, so Reeves joins him in the pursuit. Ben soon runs into Jack (Johnny Depp) as he is walking around with his new girlfriend Dana (Karyn O’Bryan), and he gets Jack running along with him. Meanwhile, Mrs. Rawlings is found and freed by her niece, Shirley (Hilary Shapiro).

After a lot more zaniness around the resort involving Ben, Jack, the former’s new girlfriend Patti (Emily Longstreth), the Maestro, Reeves, and just about every other oddball guest and hotel staff member featured in the movie, Mrs. Rawlings appears and fingers the Maestro as the diamond thief to some recently-arrived cops, and then she beats him up. The Maestro gets placed under arrest.

To show her gratitude for their efforts in protecting her diamond and trying to stop the Maestro, Mrs. Rawlings decides to take Ben and Jack on several vacations around the world, and they bring their girlfriends along for the ride. 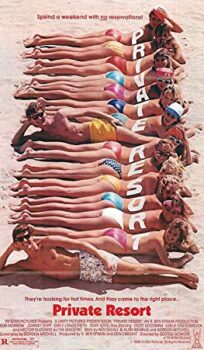