When Ben’s (John Ritter’s) and LaWanda’s (Laraine Newman’s) wedding is about to take place, Trixie (Ivyann Schwan) crashes in, driving a tractor which is carrying the famous Love Rock.  This causes LaWanda to have an outburst and show her true, child-hating nature, which disappoints Ben.  As everyone runs away from the rolling rock, LaWanda attempts to stop her, only to be run over by it.

Trixie’s mom, Nurse Annie (Amy Yasbeck) catches up with Trixie, Ben and Junior (Michael Oliver); Ben and Annie finally realize they love each other, and Trixie and Junior reassure their friendship.  Meanwhile, Big Ben (Jack Warden) decides to marry LaWanda to solve his own financial difficulties, which she unknowingly accepts -but not before meeting a flying cake landing over them both, courtesy of one of Trixie’s blockbusters slingshot into it by Junior, as well as a massive pile of poo dropped by “Nippy”

The movie ends with Ben, Annie, Trixie and Junior happily walking off together. 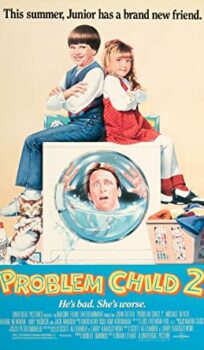